The commission on private schools established by former Governor Corzine has just released its report:

This report is more fun than many recent reports in New Jersey because it actually has some data and citations. Nonetheless, I have at least a few concerns regarding the presentation of the data and implications drawn from it. I was particularly intrigued by the graph on page 7 – which I replicate below:

This graph shows an apparent catastrophic collapse of the private schooling sector in New Jersey… or does it? Look at that the Y (vertical) axis. The range is from 160,000 to 192,000.  Yeah… that makes for a really steep apparent drop off. Note also that this data is from a state department of education source and is not reconciled against any other source. So, a stretched Y axis to make it look really, really, really dramatic. No second look – second opinion. And, only a single aggregate count of private school kids to show a major across-the-board collapse.

First, here are the number of private schools by type in New Jersey over time: 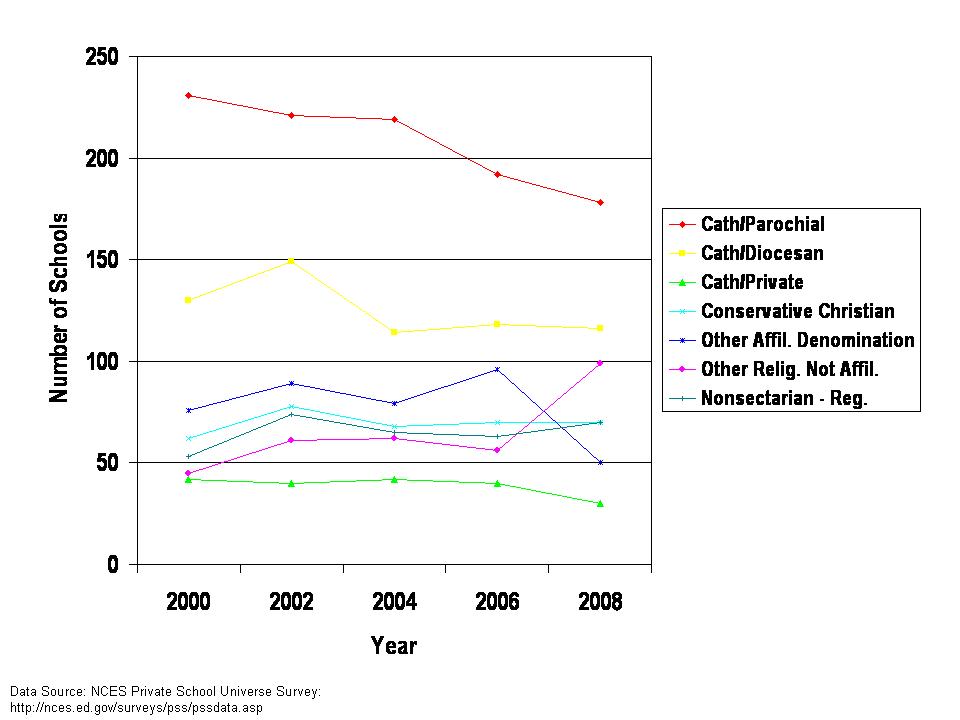 Next, here are the enrollment and in the second graph, enrollment adjusted for missing data.

As with numbers of schools, the most substantive decline is for Catholic Parochial schools. There is a smaller drop for Catholic Diocesan schools. Other schools stay relatively constant, with some reclassification occurring between Other Religious – Not Affiliated and Other Affiliated. Note that the corrected, weighted version in the second graph above shows a somewhat smaller decline in Catholic Parochial enrollment than the un-adjusted version.

And the private school population by grade level: 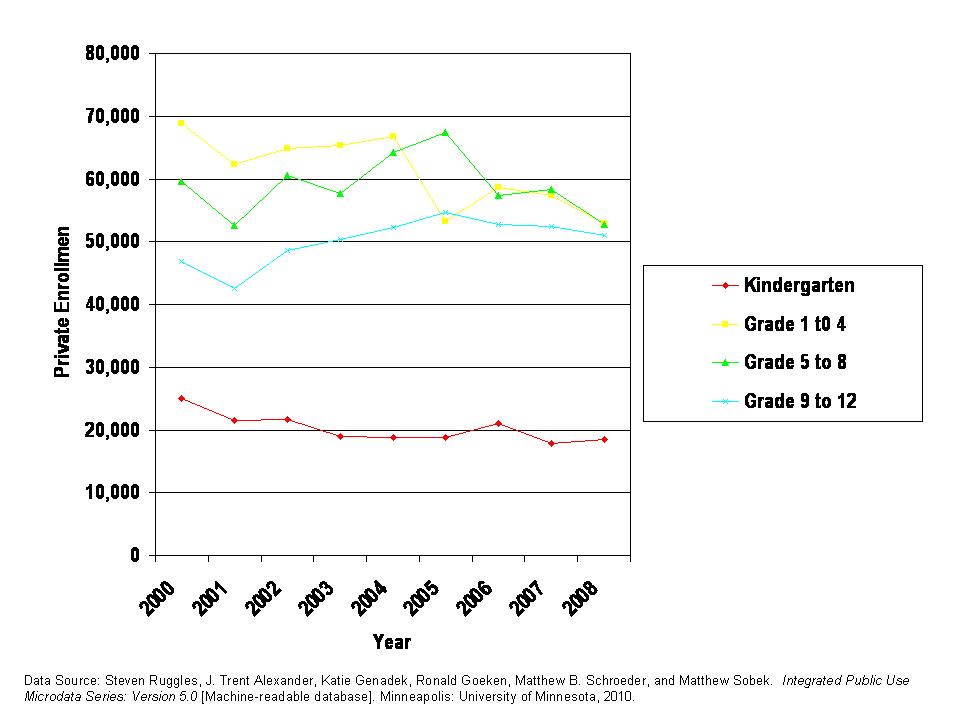 What we see in this second graph is that the Grades 1 to 4 population appears to be declining most.

This much more refined picture, across two additional data sets casts some doubt on the significance of the first graph above. Is there really a massive collapse of private schooling in New Jersey? It doesn’t look that way to me.

Explanations and Policy Implications for Catholic Schooling in New Jersey

Indeed, there may be some cause for concern for Catholic Parochial schools which appear to be closing and losing enrollment. But this phenomenon is not unique to New Jersey. Others have attempted to shed light on why Catholic schools are struggling in many urban centers.  Catholic schools have tried to remain accessible to the middle class by holding tuition down. At the same time, costs have risen. Decades ago, Catholic schools relied heavily on unpaid, church affiliated staff. Now, nearly all staff are salaried. My own recent analysis suggest that the cost of operating many Catholic schools are quite similar to those for traditional public school districts. The gap between tuition and cost has grown substantially over time for these schools. That’s not sustainable.

Two recent reports provide additional insights regarding public policy forces that may be compromising the stability of Catholic schooling in particular:

1) This Pew Trust report on parental choices in Philadelphia suggests that the expansion of Charter schools has potentially cut into the non-Catholic enrollment in urban Catholic schools.

2) This Thomas B. Fordham Institute report suggests that vouchers in other locations such as Milwaukee have been a double-edged sword for Catholic schools. Vouchers do not provide full cost subsidy and restrict charging tuition above the subsidy to cover the gap. As such, schools are required to take a loss for each voucher student accepted. Further, as Catholic schools take on more non-Catholic vouchered students, parishioner contributions tend to decline – because it is perceived that the Catholic mission of the school has been compromised.

This situation does not apply in New Jersey, but findings from other cities raise concern that an under-subsidized voucher or tuition tax credit like the proposed Opportunity Scholarship Act (NJOSA) could actually do more harm than good for many private schools.

Vouchers differ from other subsidies (like the transportation and textbook subsidies) because of the restriction on charging tuition to cover the margin between the subsidy level and actual cost.  Some schools may subvert this requirement with strongly implied requirements for “tithing” as a substitute for tuition – including voucher receiving families. In fact, families could be obligated to tithe sufficient income to the private schools (or the religious institution that governs those schools) such that the family then qualifies for the tax credit program. The state should attempt to guard against this possibility in the design of any related policy.

A reader was kind enough to send me this link: http://www.avi-chai.org/census.pdf

Page 23 of this census report on Jewish school enrollment explains:

The other side of the geographic distribution picture is the concentration of schools in New York and New Jersey, as well as the overwhelming Orthodox domination in these two states. New York has 132,500 students, up from 104,000 ten years ago, while New Jersey has nearly 29,000 students, up from 18,000 in 1998. New Jersey’s gain is nearly all attributable to Lakewood, although there has been meaningful growth in Bergen County and the Passaic area. At the same time, Solomon Schechter enrollment in New Jersey has declined precipitously.

Another reader sent me this link:  http://www.njpsa.org/userfiles/File/EO161.pdf

This link explains the charge of the commission. It would seem to me that the final report has strayed somewhat from this charge.