About a week ago, I put up a post explaining a multitude of concerns I have with the current NCLB waiver process and how it is playing out at the state level. To summarize, what we have here is the executive branch of the federal government coercing state officials to simply ignore existing federal statutes, by granting waivers to state officials who adopt the current administration’s preferred education reform strategies. Setting aside the legal/governance concerns, which are huge, few if any of these preferred strategies are informed by any sound research/analysis.

Equally if not more disturbing is how this waiver process is playing out at ground level, and the message it sends.  Once again (as in Race to the Top) the administration has encouraged the adoption of ill-conceived homogenized policy frameworks across states. States are encouraged, through the waiver application process, to propose how they will abuse data yielded by their generally inadequate data systems to inappropriately classify local public schools as a) in good standing, b) focus or c) priority.  States have been granted some flexibility as to how they will abuse their own data to gerrymander local schools into these categories.

Once schools are placed into these categories – regardless of any validity check on the meaning of those categories – those schools become subject to a prescribed set of largely unproven state intervention options – with yet another layer of complete disregard for statutory and constitutional authority (state statutes & constitution) of states to take such action.

In short, what we have is the federal executive branch  using authority it doesn’t have to grant states authority they don’t necessarily have, to unilaterally impose substantive changes on individual local public schools.

But I digress, yet again.

So, what about those categories? And how do they break down? In other words, which districts and which children are most likely to be subjected to these interventions/experimentation?

I started last week with the state of New York, pointing out that on average, New York State has (ab)used its currently available data to characterize as priority schools and focus schools, primarily those schools that are a) high in poverty, b) high in minority concentration, c) low in taxable property wealth and d) low in aggregate household income per capita.

To rub salt in the wound, even though back in 2003 New York State was ordered to correct deficiencies in school funding across districts, and even thought state itself proposed a relatively inadequate formula to address those disparities, the state has continued to ignore its own formula – shorting by the largest amounts, those districts that are home to the most priority schools. (for a thorough analysis, see: https://schoolfinance101.files.wordpress.com/2010/01/ny-aid-policy-brief_fall2011_draft6.pdf)

This is where we last left off:

But, my analysis last week largely left out New York City schools. Bear in mind that New York City like many other high need districts around the state continues to be substantially shorted under the state’s own proposed foundation funding formula. 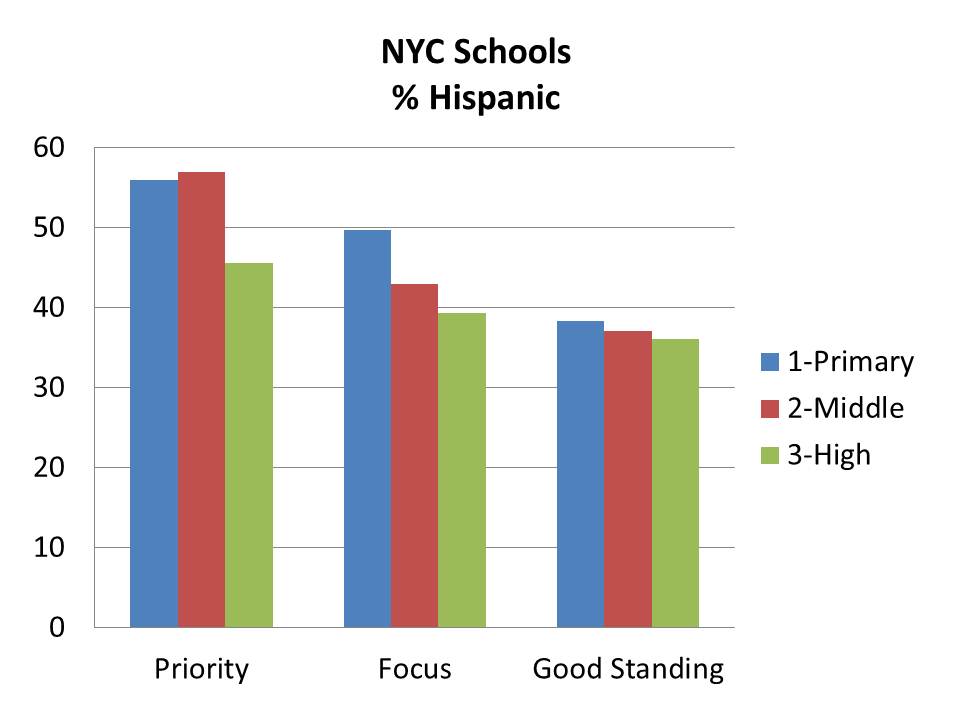 In other words, it would certainly seem that while reformy-rhetoric dictates that demography should not determine destiny, demography remains a pretty strong determinant of a school’s post-nclb-waivery-classification-status.

When I run statistical tests of the relationship between demographic factors and the likelihood that a school is identified as a “priority” school, I find:

My next cut at the NYC data explores the position of priority schools with respect to a) low income students, b) special education students and c) per pupil spending (school level).

In the first two figures, we see that priority secondary schools (or at least those serving students through the secondary grades) are somewhat spread out by % free or reduced lunch. Note that bubble/diamond/triangle size indicates school size. However, there don’t appear to be any priority high schools among the lowest poverty schools, and a relatively large share appear among the higher poverty schools. They are relatively average, compared to schools with similar % free or reduced lunch, in terms of their school site spending. 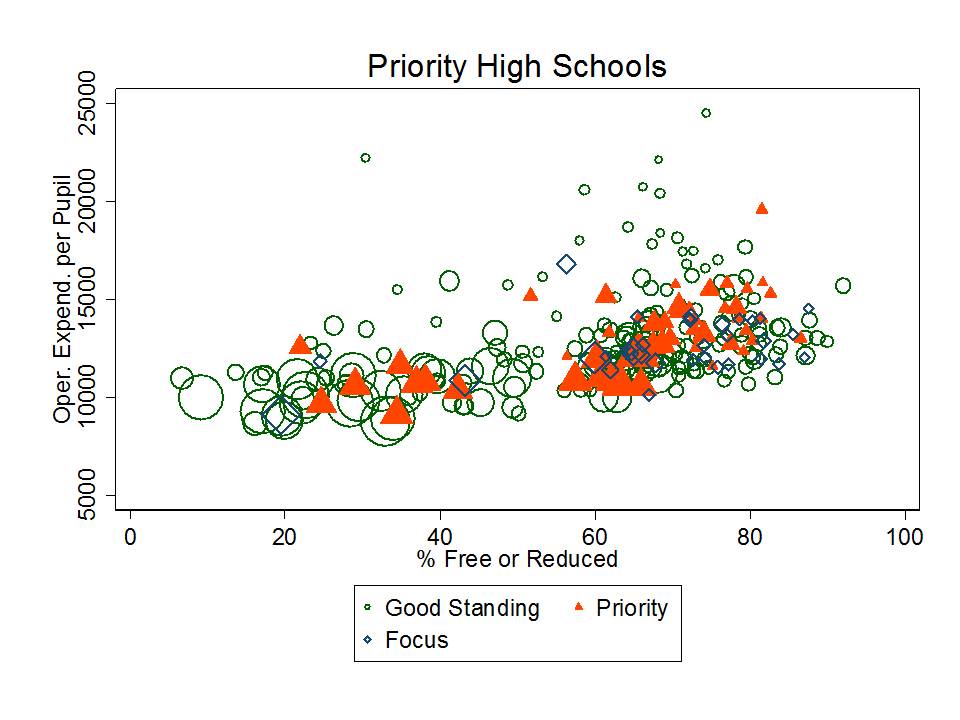 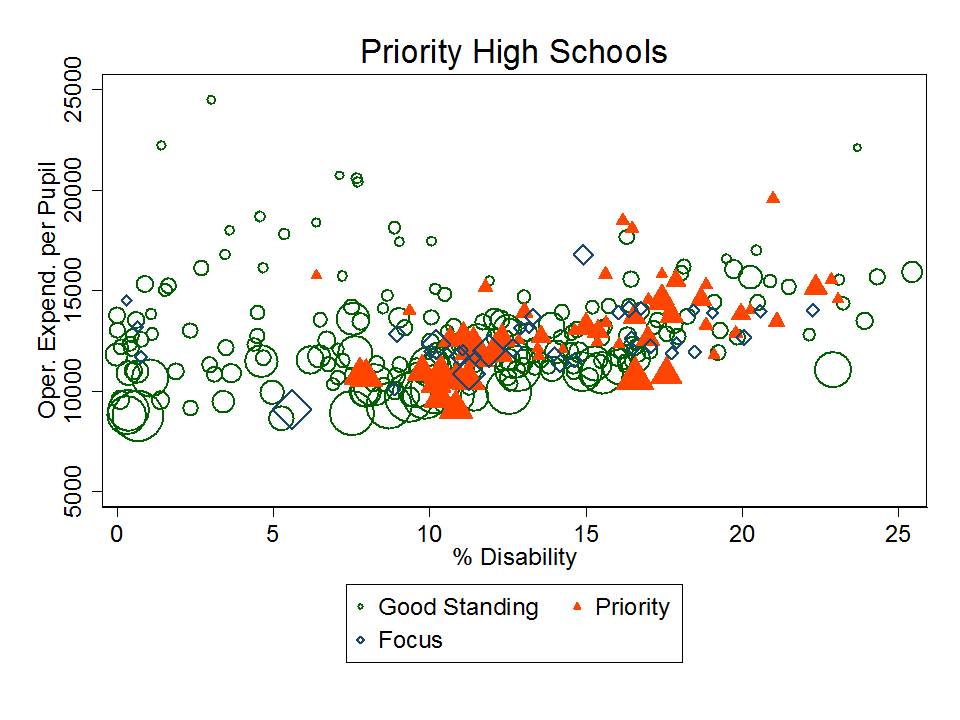 None of the middle schools with lower concentration of low income children or children in special education are classified as priority schools. 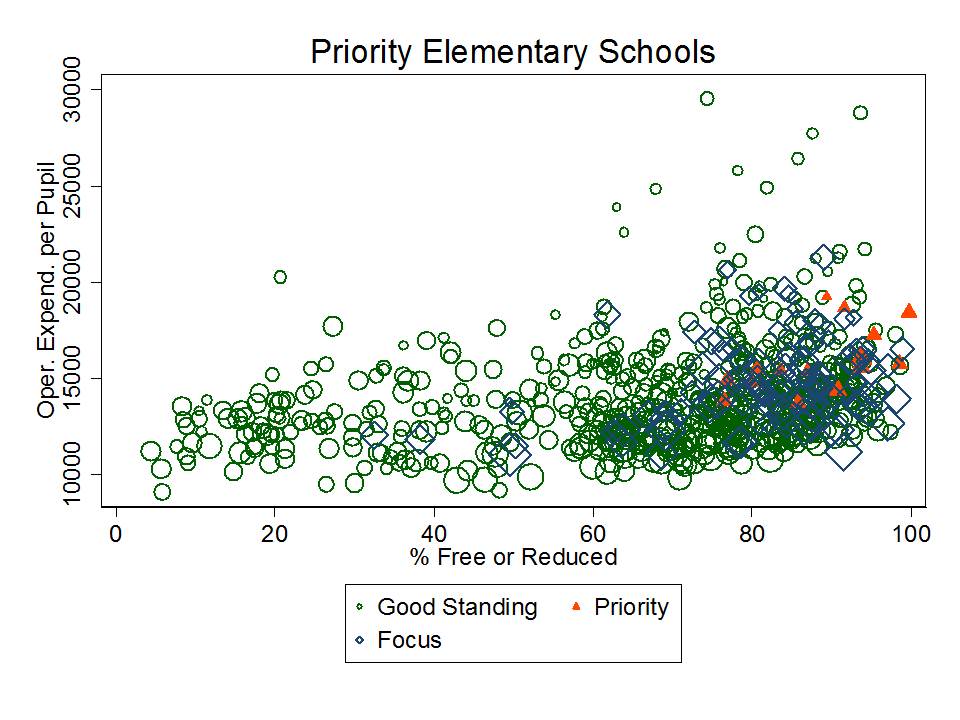 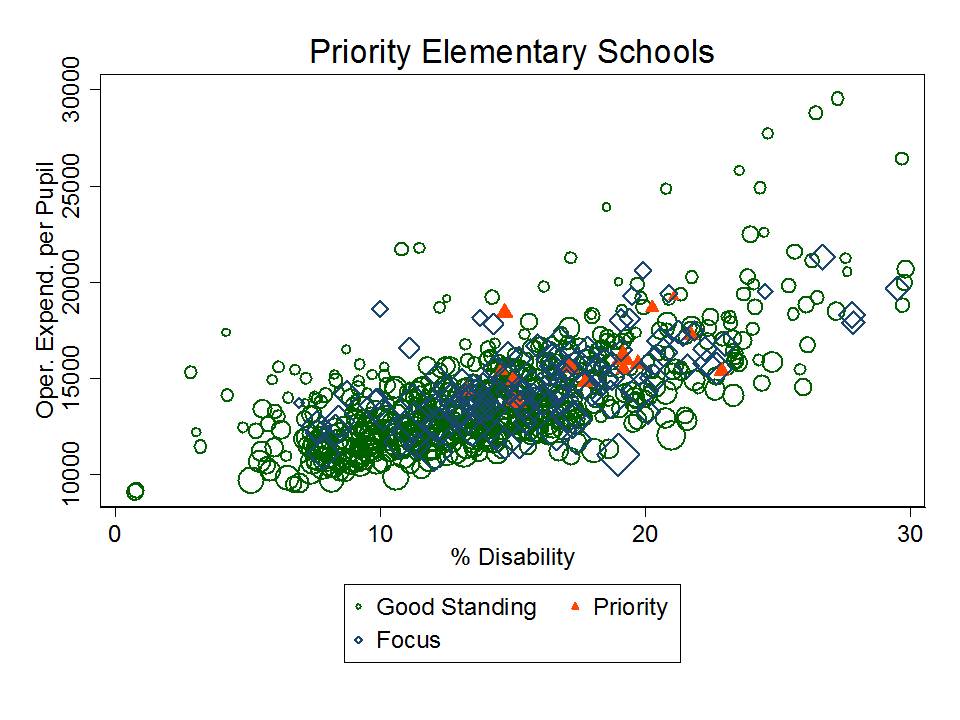 For this next graph, I took the NYC teacher level value-added data and averaged them to the school level for all teachers in each school, as in my previous post on NYC charter school teachers. (caveats included on previous post). Note that I’ve removed quite a bit of the variation in these value-added scores by aggregating them to the school level prior to constructing this graph.

While the differences in mean teacher value-added do fall in the right rank order – highest mean for good standing, second for focus and lowest for priority, the variations among schools around these means certainly muddy the waters a bit. Yes, the means are different, but the boxes overlap quite substantially!  And the consequences of being in one group versus another are quite substantial. 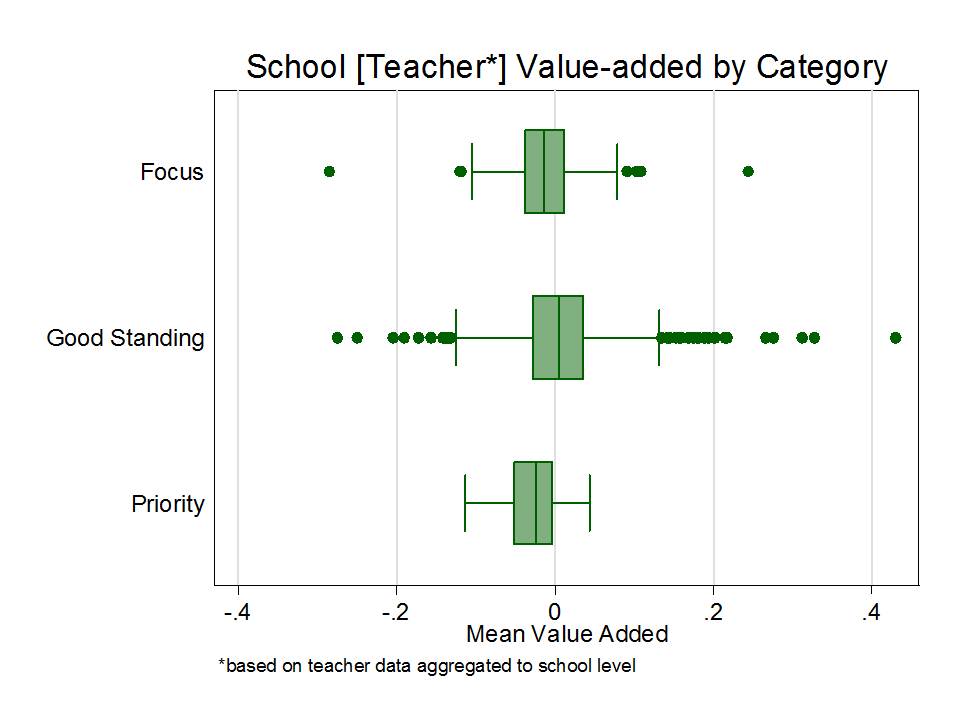 For one last statistical shot at teasing out what’s going on here, I ran a logistic regression to figure out a) whether and to what extent these differences in value-added are significant predictors of landing in priority status and b) whether a school that has more low income and minority students is more likely to land in priority status – even if it has the same teacher value-added scores?  That is, even if those statistically “bad” teachers aren’t to blame!

In other words, is there racial/socio-economic bias in the school ratings among schools with similar teacher value added? 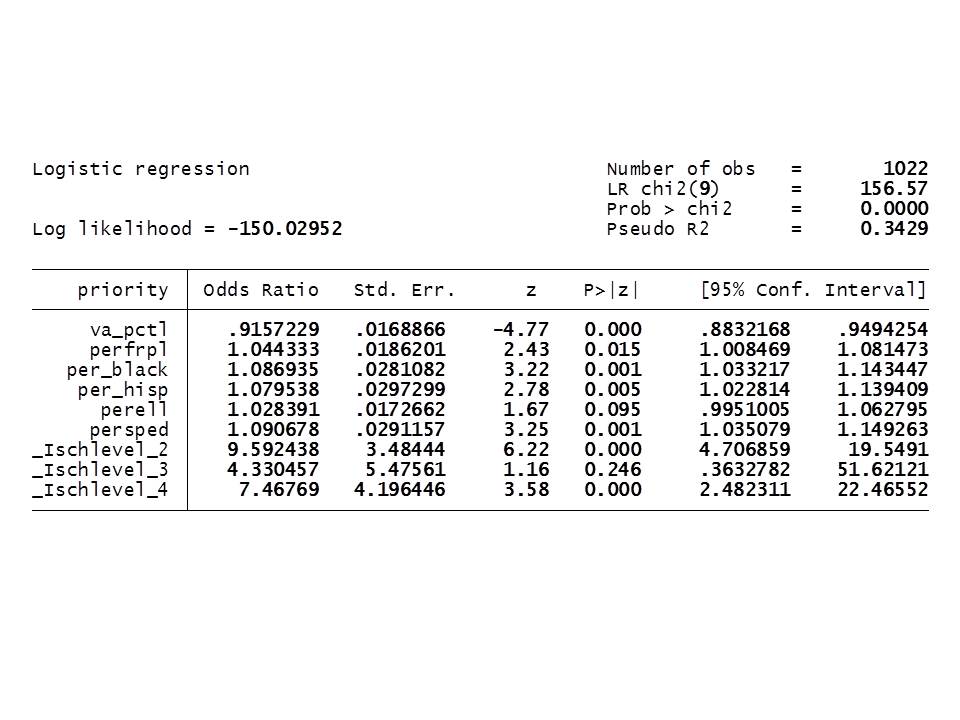 For interpretation, I used the average value-added percentile of teachers here (in place of the standardized value-added score).

What this output shows is that for a 1 percentile rank increase in the school average teacher value added, a school is about 8.4% less likely (91.6%% as likely) to be classified as priority. Having a higher aggregate value-added teacher percentile rank significantly reduces the likelihood that a schools is identified as priority. That makes sense… but certainly isn’t the whole story… and as the graph above shows, there’s a fair amount of variation within each category.

Here’s the problem. Even among schools that have the same aggregate teacher value added percentile:

And each of these biases is significant, and of non-trivial magnitude, as well.

Let’s review what this means in simple, blunt terms.

These findings mean that even in schools where the teachers have the same average value added rank/percentile, schools with more low income, minority and special education children are more likely to face anti-democratic intervention!!!!!

Now that doesn’t seem to make a whole lot of sense when the supposed reason for the need for these interventions is that these poor, minority schools simply have all of the “bad teachers,” and when a central strategy to be employed is to replace/displace the school staff.

I can hear the reformy outcry that this whole multi-level coercive illegal power grab to impose reformy intervention is in fact a critical step toward guaranteeing that demography isn’t destiny… to make widely known the fact that we’ve continued to provide minority and low income students the worst teachers and the worst schools. And that those teachers and schools must go [even if many of them outperform teachers in schools in “good standing” on their noisy/biased VAM estimate?]! Even if that means complete disregard for our current system of government. And even if that means that the parents, children and employees in these schools have to be forced to forgo additional constitutional and statutory protections (depending on the imposed reform).

It would be one thing if the measurement systems we were using to classify these schools as “failing” were valid for making such decisive declarations. That is, valid for making the assertion that it is the quality of the school and its teachers – and other controllable factors – that are primarily responsible for the performance.

Bruce Baker is an Associate Professor in the Graduate School of Education at Rutgers, The State University of New Jersey. From 1997 to 2008 he was a professor at the University of Kansas in Lawrence, KS. He is lead author with Preston Green (Penn State University) and Craig Richards (Teachers College, Columbia University) of Financing Education Systems, a graduate level textbook on school finance policy published by Merrill/Prentice-Hall. Professor Baker has written a multitude of peer reviewed research articles on state school finance policy, teacher labor markets, school leadership labor markets and higher education finance and policy. His recent work has focused on measuring cost variations associated with schooling contexts and student population characteristics, including ways to better design state school finance policies and local district allocation formulas (including Weighted Student Funding) for better meeting the needs of students. Baker, along with Preston Green of Penn State University are co-authors of the chapter on Conceptions of Equity in the recently released Handbook of Research Education Finance and Policy, and co-authors of the chapter on the Politics of Education Finance in the Handbook of Education Politics and Policy and co-authors of the chapter on School Finance in the Handbook of Education Policy of the American Educational Research Association. Professor Baker has also consulted for state legislatures, boards of education and other organizations on education policy and school finance issues and has testified in state school finance litigation in Kansas, Missouri and Arizona. He is a member of the Think Tank Review Panel, a group of academic researchers who conduct technical reviews of publicly released think tank reports on education policy issues. View all posts by schoolfinance101

Center for the Advanced Study of Technology in Leadership Education