I was intrigued a few days ago when I saw this headline in my news alerts regarding school funding.

I was particularly intrigued because the headline comes from a Connecticut newspaper where I am fully aware that the state really hasn’t done crap to substantively increase resources for low performing, or more specifically high need schools and districts.

Disclaimer: I am fully aware of this because I have been providing technical/expert assistance to local public school districts that have been persistently shortchanged by the state school finance formula (Education Cost Sharing Formula). That, and even prior to my involvement supporting these districts (and more importantly, the kids they serve) in Connecticut, I had already blogged on their plight.

So then, how can it possibly be that that a CT newspaper would print such a ridiculous headline? And where could one possibly find a “Report” that somehow validates that the state has provided funding to help low performing districts?

Well, in Connecticut, where there’s data-free drivel on education policy spewing from the headlines, there’s usually one single source for that drivel – our old friends at ConnCAN!

Yep, they’ve produced a new report! And it’s about as technically solid as many of their previous reports!

An important caveat here is that the ConnCAN report itself (the linked report) doesn’t really seem to address directly the point that is highlighted in this article – that the reforms being implemented by the Malloy administration have improved the financial conditions of districts serving high need populations.

So then where does this strange assertion come from? Did the author of the “news” (used as loosely as possible) article simply make this up – or were they fed this line by ConnCAN? I’m not sure… but the author of the article in the Middletown newspaper begins with this bold statement:

Funding made available by last year’s Public Act 12-116 has helped some of the states lowest-performing school districts, including Middletown, according to the Connecticut Coalition for Achievement Now, an education advocacy organization based in New Haven.

Then, the author of the article summarizes what are characterized as “Highlights from ConnCAN’s March 2013 Progress Report.”

I find it hard to believe the author of the article crafted these summaries on his/her own. So, let’s take these fact-challenged reformy highlights one at a time (again, on the assumption that these highlights are somehow intended to support the article’s thesis – that the reforms have somehow mitigated funding problems/disparities?):
ConnCAN Con:

School Finance: P.A. 12-116 created a Common Chart of Accounts to be implemented in 2014-15, creating across the board standards aimed at enhancing transparency in education spending. To date, the Office of Policy and Management has selected the accounting firm Blum Shapiro to develop a framework for Common Chart of Accounts development and execution.

Let’s start here with simple acknowledgement that creating a common chart of accounts does little or nothing – okay, NOTHING – to enhance the equity or adequacy of educational funding across districts. So, what did the state actually do to enhance that funding? Not so much really.

Figure 1 shows the effect of the $50 million dollar increase in ECS Aid for 2012-13, when added to Net Current Expenditures (NCEP) for 2011-12. The 2011-12 NCEP distribution is shown in green dots. The changes to NCEP that would result from the additional state aid are shown in orange dots. In green dots, we see that districts like Bridgeport, New Britain, Waterbury and Meriden are significantly disadvantaged by the ECS formula in 2011-12, in terms of their resultant NCEP.

AND, perhaps more importantly, we see that “increases” to funding for 12-13 really didn’t change much!

Table 1 includes NCEP for 2011-12 and the actual aid increases for 2012-13 (divided by ADM for 11-12) for Alliance Districts which include several high need districts.  I have also expressed the ECS aid increase as a percent increase over NCEP 2011-12. Most increases were less than $200 per pupil and well less than 2%.

It is indeed true that recent adjustments to the funding formula provided more significant increases in aid to charter schools.  At best, these increases fail to alter the distribution of opportunities to Connecticut schoolchildren.  More likely, they in fact exacerbate disparities. Charters serve a relatively small share of the total student population. Most children in high need districts remain in district schools that saw negligible increase in funding. In that sense, charter funding increases have limited effect.

But, as it turns out, many of the charter schools in high need districts that received the greater increases in funding actually serve much lower need student populations (See Table 2).

In short, increasing funding to charters which already outspent host districts while cream-skimming lower need students, exacerbates rather than moderating disparities in opportunity.

Table 3. Total & Comparable per Pupil Spending for Charters & Districts with Free/Reduced Lunch >50%, 2009-10, Prior to Funding Boost for Charter Schools

[1] Per Pupil Expenditures by Type: http://sdeportal.ct.gov/Cedar/WEB/ct_report/FinanceDTViewer.aspx

Alliance Districts: P.A. 12-116 earmarked $39.5 million in conditional aid for the state’s 30 lowest performing school districts. So far, all 30 district plans have been approved and $39.5 million allocated.

Now, in the charts above, you’ve seen the rather dramatic (cough/gag) effect that adding $50 million has on Connecticut’s high need districts through the aid formula. Well, here what we have is an even smaller amount of additional aid, to be handed out at the discretion of a single bureaucrat. Nothing systematic. Nothing substantial. Entirely discretionary, and meager.

As noted by ConnCAN, the legislation provides for 25 schools to enter the Commissioner’s network and maybe have access to some additional financial assistance.  There are far more than 25 schools in total in high need districts.  Further, each school can remain in the network for a maximum of three years, and it is unclear whether any supports would exist beyond those three years.

Let’s be absolutely clear here: Educational adequacy and equal educational opportunity a) should not be reserved for a tiny minority of schools, b) should not sunset and c) should not be at the discretion of a single political appointee.

Equally if not more likely, the various proposed structural and governance changes, coupled with new unfunded mandates, will exacerbate existing inequities across Connecticut schools and districts.   For example, many of the policy changes addressed by ConnCAN are little more than labeling schemes that merely highlight existing disparities.

Worse, the most negative and consequential labels fall disproportionately on schools in those districts already disadvantaged financially.

A substantial body of existing literature links school rating systems with local residential property values, including state accountability system assigned school grades.[2]  In short, negative labels may lead to further erosion of housing values and tax base. Further, it is likely that increased threat of state intervention and reduction of local control over schools may adversely affect local property values. The proposed reforms, lacking any substantive provision of additional resources, threaten to accelerate a downward spiral of districts already in long-run economic and educational decline.

Already, a large share of schools classified as “review” schools are not only high need schools, but high need schools concentrated in very high need, and underfunded districts (Bridgeport, Meriden, New Britain, New London & Waterbury).[5]  By contrast, the main distinction of many of the “distinction” schools identified in urban Connecticut contexts is that they serve very few of the lowest income children, few or no children with disabilities and few or no children with limited English language proficiency (See Table 4).

Meanwhile, other schools of distinction are those in the state’s most affluent suburbs.  In other words, the state has adopted a rating scheme driven primarily by student demographics to mislabel the “quality” or “effectiveness” of local public schools. Further, the rating scheme is designed to grant the state greater authority to disrupt local governance of schools, which, while the state may perceive this alternative only in positive light, local property owners and potential property owners may view it quite differently. 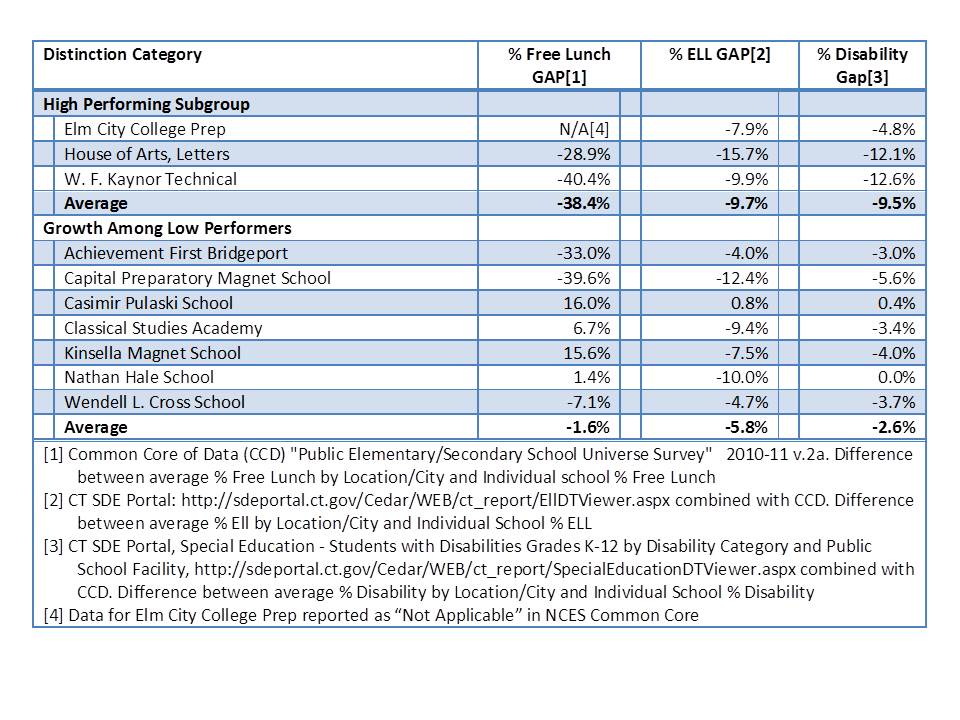 Even if one chose to accept that improved teacher evaluation systems and teacher effectiveness measures could be leveraged to better select among teachers on the labor market or in a particular district workforce, our ability to apply that leverage to improve the workforce as a whole, or achieve more equitable distribution of teaching quality would be constrained by a) the overall landscape of teacher compensation relative to other career alternatives and b)  the persistent inequities in financial resources across districts and resulting inequities teacher compensation across advantaged and disadvantaged schools and districts.

The suggestion that mandated changes to teacher evaluation alone will improve the equity and adequacy of the teacher workforce – regardless of resources – ignores that the proposed evaluation models have the potential to significantly increase job uncertainty for teachers without providing increased wages or benefits to counterbalance the risk. Increased job/career and wage expectation uncertainty, while holding wages on average, constant, is likely to lead to reduced, not increased quality of entrants to the profession.

Further, given the emerging body of evidence on the types of metrics proposed for teacher evaluation, career uncertainty is likely to be inequitably distributed, disadvantaging children in already disadvantaged districts and schools.[6]

[1] Not accounted for here are potential differences in facilities operation & lease costs. It is often argued that the costs of facilities are particularly high for charter schools, consuming large shares of their budgets, while facilities are “free” for public districts. In reality, one can expect facilities leases for Connecticut charter schools to range from $1,500 per pupil to around $2,000 per pupil (which is indeed significant) and one can expect annual maintenance and operations (not including long term debt expense) for districts to be around $1,400 per pupil (in 2010 based on CTDOE Data).  The state’s choice to provide substantially increased funding for charter schools and not to host district schools was not based on any thorough analysis of actual differences in costs or needs.

5 thoughts on “In Connecticut, Where There’s a Reformy Con, There’s a CAN!”