Once upon a time, there was this totally awesome charter school in Newark, NJ. It was a charter school so awesome that its leaders and founders and all of their close friends decided they must share their miracle with the world in books on the reasons for their awesomeness, including being driven by data and teaching like a champion!

The school’s break-the-mold – beating the odds – disruptively innovative awesomeness was particularly important during this critical time of utter collapse of the American education system which had undoubtedly been caused by corrupt self-interested public school teachers (& their unions) who had been uniformly ill-trained by antiquated colleges and universities that themselves were corrupt and self-interested and generally in the business of selling worthless graduate degrees.

In fact, the undisputed awesomeness of this North Star Academy could, in theory, provide the foundation for a whole new approach to turning around the dreadful state of American education.

And thus came the Cycle of Reformy Awesomeness, which looks something like this:

Built on the foundation of awesomeness established by THE North Star Academy, since teachers are the undisputed most important in school factor determining student outcomes, the awesomeness of North Star could be attributed primarily to the quality of the teachers and innovative practices they used in their data driven classrooms!

Thus, by extension, we must establish new institutions of teacher preparation whereby these truly exceptional teachers (of 3 to 5 years experience) not only are provided the opportunity to share their expertise on a personal collaborative level with their own colleagues, but rather, we should let these teachers be the instructors in a new graduate school of education (regardless of academic qualifications) and we should actually let them grant graduate degrees in education to their own colleagues.

This new approach of letting teachers in a school grant graduate degrees to their own work colleagues (and those in other network schools) could lead to rapid diffusion of excellence and would most certainly negate the corrupt perverse incentives pervasive throughout the current, adult oriented self-interested American higher education system! Disruptive innovation indeed!

And driven by data they were… for example… absolutely all of the kids in their school passed that test in high school.

And that one too:

And they were only getting better, and better and better:

The more they looked at their own data – well, really only one measure of their data – the more they patted themselves on the back, congratulated their own reformy awesomeness and shared it with the world. And the state!

Yup… 100% graduation rate… which is totally unheard of for a high poverty, urban high school in dreadful Newark, NJ! [or at least for a school that happens to be located in the high poverty city of Newark].

A true miracle it was… is… and shall be. One that must be proliferated and shared widely.

As it turned out, those kids in North Star really didn’t look so much like those others they were apparently so handily blowing out on state tests….

Somehow, this rapidly growing miracle school was managing to serve far fewer poor children than others (except a few other charter schools also claiming miracle status) around them.

And, they were serving hardly any children with disabilities and few or none with more severe disabilities. 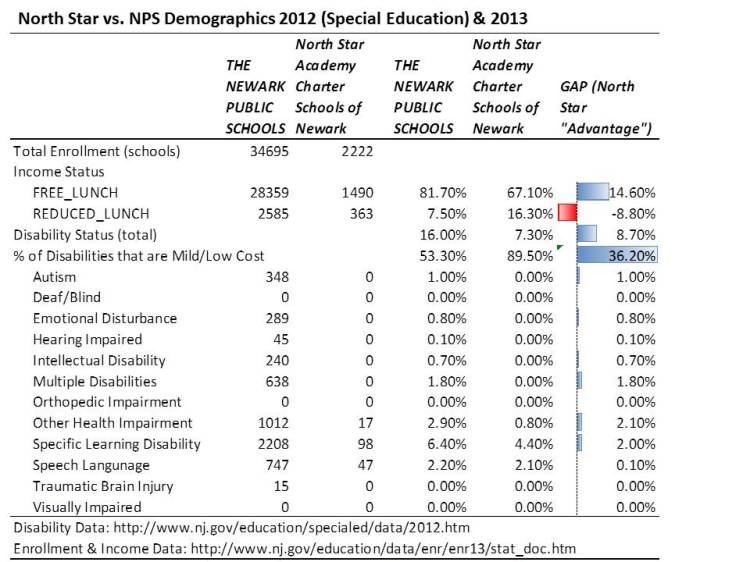 And again there was complete freakin’ silence!

And if that was the case, was it really reasonable to attribute their awesomeness to the awesomeness of their own teachers – their innovative strategies… and the nuanced, deep understanding of being driven by data?

Actually, it is perhaps most befuddling if not outright damning that such non-trivial data could be so persistently ignored in a school that is so driven by data?

But alas, these were mere minor signals that all might not be as awesome as originally assumed.

And for black boys in the school, far fewer than that: 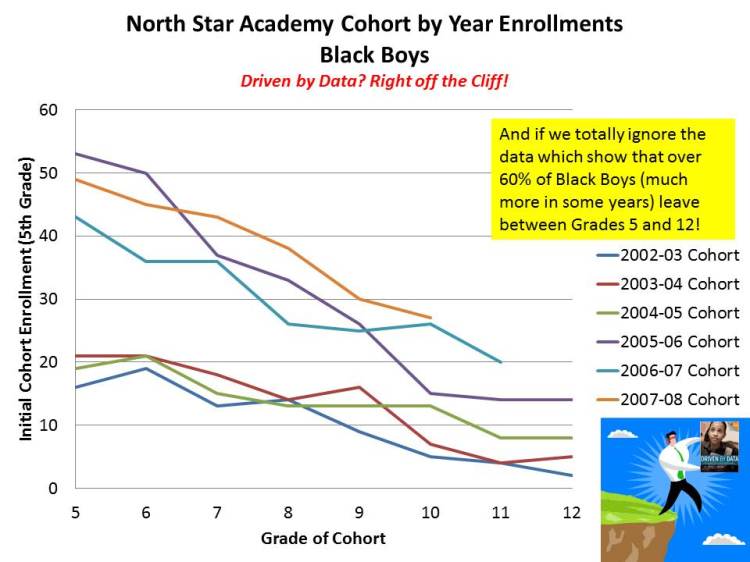 And in any given year, children were being suspended from the school at an alarming rate.

Again… raising the question of how a school driven by data could rely so heavily on a single metric – test scores and pass rates derived from them – to proclaim their awesomeness, when in fact, things were looking somewhat less than awesome.

Could a school really be awesome  if only the fewer than half who remain (or 20% of black boys who remain) pass the test? Might it matter at least equally as much what happened to the the other half who left?

Was it perhaps possible that the “no excuses” strategies endorsed as best practices both in their school and in their training of each other really weren’t working so well…and weren’t the strategies of true teaching champions… but rather created a hostile and oppressive environment causing their high attrition rate? Well… one really can say this one way or the other…

Regardless of the cause, what possibly could such a school share with those traditional supposedly failing public schools who lacked similar ability to send the majority of their children packing? Further, what possibly could the rather novice teachers in this school charged with granting their own co-workers graduate credentials share with experienced researchers and university faculty training the larger public school teacher workforce?

Alas the miracle was (is) crumbling.

But that miracle wasn’t just any ol’ miracle. Rather, it was the entire foundation for the reformy cycle of awesomeness! And without that foundation, the entire cycle comes crumbling down.

No miraculously awesome charter school [in fact, one might argue that any school with such attrition is an unqualified failure].

Thus no valid claim of miraculous teachers and teaching.

All perpetrated with deceptive and in some cases downright fraudulent (100% graduation rate?) presentation of data.

And thus the search continues… for the next miracle… and the next great disruptive innovation to base on that miracle… whatever… wherever it may be.