Note: The above briefs received financial support from the New York State Association for Small City School Districts. All opinions are my own.

The 2007 New York State Foundation Aid formula was adopted specifically to achieve compliance with the high court’s 2006 order in the Campaign for Fiscal Equity case. The State argued that this new formula was built on sound empirical analysis of the spending behavior of efficient districts that achieved adequate outcomes on State assessments. The State argued that the Foundation Aid formula applied this evidence, coupled with additional evidence-based adjustments to address student needs and regional cost variation, in order to identify a specific target level of per pupil spending for each district statewide which would provide comparable opportunities to achieve adequate educational outcomes.  The State determined the share of that target spending to be raised through local tax revenues and estimated the amount to be paid by the state toward achieving each districts’ sound basic spending target.

Then, the State simply failed to fund the formula.

When enacted, the State committed to phasing-in the Foundation Aid formula from 2007 to 2010-2011.  The data behind the base spending calculation had been drawn from 2003-2005, and included general education instructional spending of school districts that a) achieved 80% proficiency rates on state assessments, and b) were in the lower half spending districts among those who achieved desired outcomes.  The formula for transitioning these figures to spending targets involves a combination of inflation adjustment, and phase-in percent to bring the dated estimates up to date and project the annual increases for hitting the adequate spending target in future years – four years out in the case of the original proposed remedy.

The current Foundation Aid formula may be described as follows.

Under this formula, the State determines the need and cost adjusted target spending for each district by taking the foundation funding level and multiplying it times the pupil need adjustment index (PNI) and then times the regional labor cost adjustment index (RCI). This approach is reasonable only to the extent that the target level of funding generated for each district by the formula represents what the State determines in necessary districts to provide a meaningful high school education, the constitutional standards established in the CFE rulings.

In 2012-13, the inflation adjusted foundation level of funding [for aid calculation purposes] was set to $6,580[1], a value which on its face is far lower than existing spending levels in nearly every New York State public school district or charter school.  The pupil need index combines measures of poverty (U.S. Census Poverty and Free or Reduced Lunch) shares of children with limited English language proficiency, and district population sparsity.  Finally, the Regional Cost Index is intended to recognize “regional variations in purchasing power around the State, based on wages of non-school professionals.”

It is important to note that, under this formula, the State provides every district a minimum of at least $500 per pupil in Foundation Aid without regard to whether the district has the ability to raise local revenue to meet or exceed their spending target on their own, without State aid.  In this calculation, total Aidable Foundation Pupil Units (TAFPU) include additional weighted adjustments for children with disabilities (not addressed in the PNI), pupils in summer school and half versus full day kindergarten. 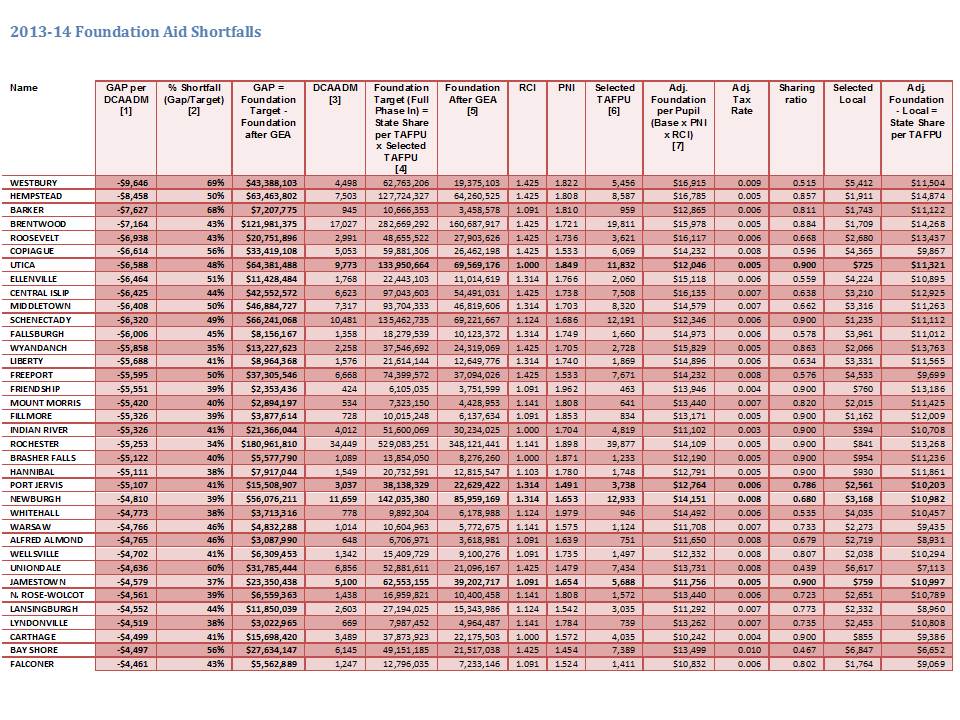 On January 17, 2014 district by district data became available for Governor Cuomo’s budget proposal for the 2014-15 school year. As discussed in the appendix the Adequacy Target Funding per Pupil, which is the “Adjusted Foundation aid per TAFPU [Total Aidable Foundation Pupil Units] is arrived at by taking a base funding figure times the pupil needs index (PNI) times the regional cost index (RCI). That base funding figure is intended to be based on average spending of the lower half of local public school districts meeting prescribed outcome standards, as discussed in the policy brief released concurrent with these analyses. Inexplicably, the state has chosen over the past few years to lower that base funding amount, despite increasing outcome standards.

Using the state’s own spreadsheets for aid allotments, one can back these figures out of the state aid worksheets as well by taking each districts’ “Adjusted Foundation per Pupil” divided by their PNI and RCI. For 2012-13, that figure rounds to $6,580 for each district. The 2013-14 aid worksheets yield a foundation level of only $6,515, or a cut to the foundation level of $65.  Backing this figure out of the 2014-15 budget proposal yields $6,458, another cut to the base funding level. This means that the gaps in funding for the past few years are further understated in these tables. Yet, these gaps are still huge. The table below summarizes those gaps for the 50 districts with the largest per pupil funding gaps.

Comparing the Governor’s budget for 2014-15 to prior year gaps provides an appearance that the Governor’s budget helps in closing the gaps substantially for some districts like Utica. This is a false impression however, created by lowering the adequacy target to offset the increase in pupil needs.

What about New York City?

These shortfalls remain over $2,500 per pupil for a total approaching $3 billion.

Put simply, higher student outcome standards cost more to achieve, not less. As explained above, the New York State school finance formula is built on an underlying basic cost estimate of what it would take for a low need (no additional student needs) district to achieve adequate educational outcomes as measured on state assessments. The current formula is built on average spending estimates dating back several years now and based on prior outcome standards, tied to a goal of achieving 80% proficient or higher. More than once in the past several years, the state has substantively increased the measured outcome standards.

While it appears that the state has been chipping away at funding gaps for districts including New York City, they have not done so by substantively increasing funding, but rather by decreasing the adequate funding target.  This figure shows that the underlying basic cost figure for the foundation aid formula climbed gradually as planned through 2012-13. Note that this climb was based on the assumed 80% success rate on the 2007-08 outcome standard, not considering the 2009-10 adjustment to that outcome standard. But inexplicably, the state has chosen to reduce the basic funding figure for each year since, despite raising the outcome standards dramatically.

Raising outcome standards while cutting funding is a formula for failure.

The current “adequacy” target (according to the foundation aid formula) is the fully phased in adequacy target per (selected) aidable pupil unit, or, as laid out above:

This formula adequacy target represents what the state itself adopted as the quantification of its own constitutional obligation to provide for a sound basic education. Later in this brief, I challenge the validity of this target, but for purposes of this section, it is appropriate to consider this figure as the state’s own definition of its constitutional obligation.

The state aid per pupil (TAFPU) to reach that state prescribed adequacy target is then:

And the total state aid to be received, if the formula was both fully phased in and fully funded is:

Where “phase in” refers to the fact that the foundation formula is intended to scale toward full adequacy funding over three year periods (originally, four years reaching the target in 2011). Phase in, as referred to in this case, is a reduction to the target funding, representing the progress toward fully phased in funding to be made in the coming year. In the following analyses, and as represented above, I compare current funding against foundation aid before this reduction (phase in) is applied.

Thus, the extent of underfunding is:

The underfunding of the foundation formula results from two specific calculations. First, instead of actually basing foundation aid on the above calculations – that is, the actual formula – aid is simply frozen[4] (or proportionately marginally increased) relative to prior year total (not per pupil) aid. Then, in a two-step calculation, aid is reduced using the Gap Elimination Adjustment and then partially restored for most districts.[5]

For example, for the city of Utica:

But, as shown in the following table, estimated actual (frozen) foundation aid is:

So the preliminary foundation aid funding gap for Utica is:

The real gap for Utica is, therefore, as follows:

In the table, we see that Utica actually receives only about half of the total state aid it should receive if the formula was funded. Other small city districts face similar shortfalls, with Utica also receiving about half of the state aid estimated as needed under the state foundation aid formula.

The table also provides a per pupil calculation of the degree of state aid underfunding across Small City districts and New York City.  I calculate the foundation aid gap per Duplicated Combined Adjusted Average Daily Membership, or DCAADM[6] which is the district enrollment figure commonly used in the state fiscal profiles files for calculating per pupil amounts.

[6] Duplicated CAADM. This item (Duplicated Combined Adjusted Average Daily Membership or DCAADM) is the pupil count used to calculate per pupil amounts for the revenue items and expenditure categories. The pupil count is based on data from State aid worksheets and Basic Educational Data System forms. This pupil count is the best count of the number of students receiving their educational program at district expense. DCAADM includes the average daily membership (ADM) of students enrolled in district programs (including half-day kindergarten pupils weighted at 0.5); plus equivalent secondary attendance of students under 21 years of age who are not on a regular day school register plus pupils with disabilities attending Boards of Cooperative Educational Services (BOCES) full time plus pupils with disabilities in approved private school programs including State schools at Rome and Batavia plus resident students for whom the district pays tuition to another school district plus incarcerated youth. Beginning with the 1999-2000 school year, pupils resident to the district but attending a charter school are included. Beginning with the 2007-08 school year, students attending full-day Pre-K are weighted at 1.0, 1/2 day Pre-K weighted at 0.5. Since residents attending other districts were also included in the CAADM count of the receiving district, this pupil count is a duplicated count. The State total consists of the sum of the rounded pupil counts of each school district. Data Source: State Aid Suspense File. See: http://www.oms.nysed.gov/faru/Profiles/18th/revisedAppendix.html

One thought on “Friday Finance 101: NY State’s Formula for Failure”