This may just be among the most ludicrous proclamations I’ve read in quite some time, and it’s brought to us by none other than …well something with a “D” For Education Reform:

“Contrary to what you may hear from certain special interest groups, the best way to fix our schools is not just to pour more money into the education bureaucracy. New York already spends $75 billion in education annually—from public schools to state funded universities—more than the total annual budget of 47 other states. What we need is smarter investments that actually deliver results, like statewide universal full-day pre-k, scholarships for students in critically-needed STEM courses and funding to reward our hardest working teachers. Governor Cuomo is taking a stand for our students by pushing for these programs, and we should all join him in putting our students first.” – See more at: http://www.dfer.org/blog/2014/03/dfer-ny_release_1.php#sthash.GfFKgHng.dpuf

I’ve spoken on this point on many  previous occasions – that simply throwing out “big a-contextual numbers” is pointless. It says nothing. It’s bafflingly ignorant – mathematically inept and simply stupid. That NY “already spends $75 billion in education annually” is neither here nor there without context. It’s just dumb blather – pointless. Saying that it’s “more than the total budget of 47 other states” is equally stupid.
Let’s review NY state school finance issues for a moment. Here’s a recap of previous posts:

But sticking specifically to the current issue, take a look here at how the Governor’s current budget proposal severely undercuts in state aid WHAT SCHOOL DISTRICTS NEEDED BACK IN 2007 UNDER LOWER STANDARDS, based on the state’s own formula estimates.

Below are the more comprehensive briefs on this topic. Yeah… I know this is way to  difficult reading for them DFER folk… and it includes math and numbers… but those seeking a deeper understanding of school funding in New York State please do read.

Here’s a post in which I explain more concisely these issues! To summarize without copying the whole post, New York State has continued raising outcome standards and continues to fall more than 30% short of their own school finance formula funding targets. Funding targets which were a) low-balled in the first place and b) have been lowered since.

Funding shortfalls for many districts are around 50% of the aid they should receive. And those shortfalls are greatest for the neediest districts. The state continues to underfund NYC’s foundation aid by about $3 billion per year. 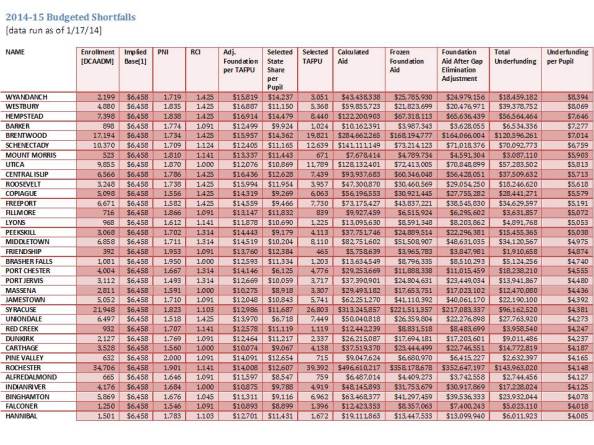 Further, our annual report Is School Funding Fair has repeatedly identified NY state as among the most regressively financed states in the nation – that is, states where state and local revenue is systematically lower in higher poverty districts.

My more recent longitudinal analyses show negligible progress for NY state from 1993 to 2011. This graph (below) of mid-Atlantic states shows that despite court orders in the past, NY state continues to operate a regressively funded  system.

On the vertical axis we have the school funding fairness ratio, based on the model we use in our annual report, but extended over 19 years. This ratio shows the expected spending or revenue at 30% census poverty over the expected revenue at 0% poverty. When the ratio is over 1.0, the system is progressive and when it’s under 1.0 it’s regressive.

NY has been regressive since 1993 and shows little sign of improving (backsliding for now). Also noted are timings of judicial rulings – this stuff is from a forthcoming paper I’m working on for an academic conference. As is well understood, Pennsylvania is also a particularly regressive state. 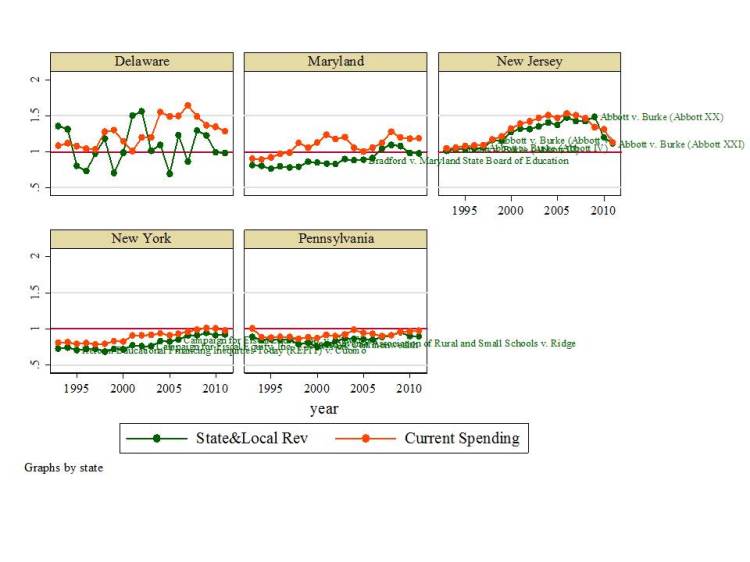 And now to reiterate one more thing – which I wrote about just the other day – uh… yesterday!

School finance reform does matter! On balance, it is safe to say that a significant and growing body of rigorous empirical literature validates that state school finance reforms can have substantive, positive effects on student outcomes, including reductions in outcome disparities or increases in overall outcome levels. Further, it stands to reason that if positive changes to school funding have positive effects on short and long run outcomes both in terms of level and distribution, then negative changes to school funding likely have negative effects on student outcomes.

It is completely ignorant to assert – NY spends $75 billion – therefore that’s enough. Schools just need to spend it better with absolutely no understanding of where that money is in the state – which districts  have more and which have less – or how much may really be needed to provide for an equitable and adequate system of school funding in New York.

So… am I forgoing civil discourse here a bit. Hell yeah! This ignorant drivel by DFER is pathetic political pandering. And it’s just dumb. Dangerously dumb.

All toward the noble cause of advocating against equitable and adequate school funding for the state’s neediest schoolchildren. ???

Civil discourse ended as soon as they decided that facts and context simply don’t matter. I simply have no tolerance for this level of stupid!