I’m no-longer surprised these days by the belligerent wrongness of rhetoric around school funding equity and adequacy. Arguably, much of the supporting rationale for the current (and other recent) education reforms is built on the house of cards that when it comes to financing equitably and adequately our public school systems – especially those serving our neediest children, we’ve been there and done that. In fact, we’ve been there and done that for decades. It just never ends. For example, as recently summarized in regional New York State news outlet:

“We’ve been putting more money into failing schools for decades,” he said. “Over the last 10 years, 250,000 children went through those failing schools, and New York government did nothing.

Yes – that’s it – for decades New York State has simply been pouring more and more money into failing schools – all of its “failing” schools, and all for naught.

Similarly, data free ideology tells us that the Commonwealth of Pennsylvania has made a fiscal experiment of Philadelphia, pouring massive sums of funding into that city’s schools, well, again, nearly forever! And to higher amounts that, well, really any other district in or in near proximity to the Commonwealth! Or so says edu-pundit Andrew Smarick on twitter just over a year ago. Here are a few gems from his Twitter rant on Philly schools:

Philly’s district = terrible for decades, families left, as a result it’s bankrupt. Gotten huge state funding for yrs to prop it up.

I know Philly gets among (if not THE) highest levels of funding from the state. I also know it’s been losing thousands of students.

As per the usual course, we are now also told that the exorbitant – highest in the country in fact – spending of Camden public schools and their persistent failure are yet another (anecdotal) proof positive that throwing money down the rat hole of government schools serving high poverty neighborhoods, is well, pointless. Or so says a new Reason Foundation documentary using Camden as the anecdote du jour:

In Camden, per pupil spending was more than $25,000 in 2013, making it one of the highest spending districts in the nation. http://reason.com/reasontv/2015/01/26/money-didnt-fix-camdens-failing-schools

Well, actually, the only national database of per pupil spending available even by this date go up to 2011-12. So I’m not quite sure what they’re talking about. In 2012, taking census fiscal survey data (http://www.census.gov/govs/school/) divided by the regional cost index (http://bush.tamu.edu/research/faculty/taylor_CWI/) Camden comes in ranked 1,128th of about 13,376 districts with complete data. So yes, it’s relatively high – Top 10%. But that quote above is totally made up (since the data aren’t even available to support it) and, well, exaggerated, at best.

Nor is it necessarily useful to try to use such bombastic (and made up) anecdotes to “prove” a point that’s been repeatedly rebutted by actual research!

In addition to the studies noted at the link above, I’ve addressed in two lengthy academic articles this propensity to drive policy rhetoric with half true (at the very best) anecdotes (hoping no one will ever actually fact check). For years, Newark (the state of New Jersey) and Kansas City, Missouri (as a result of desegregation litigation from the 1980s through early 1990s) were frequently used as proof that money doesn’t matter. See these two articles for the through debunking:

Something I find particularly baffling is the tendency of those crafting these anecdotes to not even bother to check whether, to what extent and for how long funding was actually poured into these districts – or any high need districts. Have we really been there and done that? Have state governments across this great land already done all they can to provide fiscal sustenance to those with the greatest educational needs? And all for naught? Thus bring on the cost cutting reforms?

What is less well known – or less frequently illustrated – is that in many cases, not much has changed in as much as twenty years!

And what is also less well known is that even in those cases where funding was targeted to areas of greater need, that funding really never reached the levels that would have been needed to make substantive progress on closing achievement gaps – even with surrounding districts’ children, and that funding while coming in the occasional burst in select locations, was never really sustained even as long as it would take a single cohort of children to pass through a k-12 system.

We do have some evidence from peer reviewed literature on what it might actually take to provide children in higher poverty settings with equal opportunity to achieve comparable outcomes to their more economically advantaged peers. William Duncombe and John Yinger (2005) find that as we move from a school or district with 0% to 100% low income children, the cost per pupil of achieving common outcome target doubles, or more than doubles when using Census poverty rates as the measure.[1] In other words, it would take a substantial infusion of funding to have any real shot at closing achievement gaps.

Let’s take a look at a) some persistently financially deprived settings over time and b) some settings where we have supposedly been there and done that (with money). For the following figures, I use the strategy that I’ve used previously – comparing the relative poverty and relative per pupil revenues (and spending) of school districts – compared to all other districts in the same labor market. Here’s my explanation for using this approach, from a recent Center for American Progress report:

It is important to understand that the value of any given level of education funding, in any given location, is relative. That is, it matters less whether a district spends $10,000 per pupil or $20,000 per pupil than how that funding compares to other districts operating in the same regional labor market—and, for that matter, how that money relates to other conditions in the regional labor market.

The first reason relative funding matters is that schooling is labor intensive. The quality of schooling depends largely on the ability of schools or districts to recruit and retain quality employees. The largest share of school districts’ annual operating budgets is tied up in the salaries and wages of teachers and other school workers. The ability to recruit and retain teachers in a school district in any given labor market depends on the wage a district can pay to teachers relative to other surrounding schools or districts and relative to nonteaching alternatives in the same labor market.[2] The second reason is that graduates’ access to opportunities beyond high school is largely relative and regional. The ability of graduates of one school district to gain access to higher education or the labor force depends on the regional pool in which the graduate must compete.[3]

First let’s look at longitudinal trends for some of the very districts I identified as suffering severe financial disadvantage in my Center for American Progress Report: 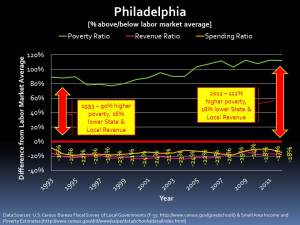 [poured money in for decades, really?] 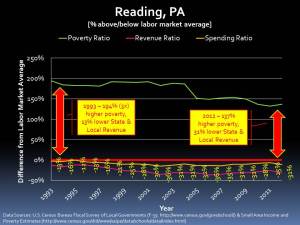 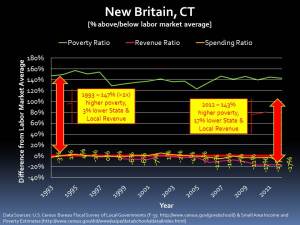 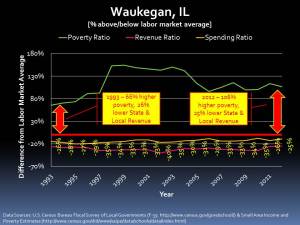 Note that in some cases, relative poverty declines as poverty rates of surrounding districts increases.

Next, let’s take a look at some of those districts that supposedly provide proof positive – irrefutable evidence – that decades worth of highest in the nation spending – was all for naught. One need not even address the “naught” part if the “all for” part was, well, untrue.

First, here’s Kansas City – where funding was indeed elevated in the early 1990s, scaling up beginning around 1989. We discuss this case extensively in this article.

However, it is important to note that this funding, after 1995 tapered off rapidly and never really rebounded, except for a temporary spike around 2009, when the district’s boundaries were reduced (when the remaining majority white corner of the district annexed itself to neighboring Independence school district). Throughout the 2000s, but for this temporary blip, Kansas City’s state and local revenues per pupil have hovered marginally above labor market averages, while the district’s poverty rate has hovered at more than 2.5 times the labor market average rate.

How about Newark and, now Camden. While these cities are clearly better off than Philly, Bridgeport or Utica, it’s not like there’s really been a sustained massive infusion of funding over time. Both start the period with funding near labor market average levels and with double (Newark) to more than triple (Camden) the labor market poverty rates. Funding escalates from the late 1990s in Newark, and mid-2000s in Camden to about a 34% (Newark) and temporarily over 50% (Camden) margin over labor market averages, coming to rest around1/3 above labor market averages for both. But given their relative poverty and estimates of costs associated with poverty, even these margins fall well short. Further, they are only sustained for about 4 years (Camden) to almost ten years (at smaller margins, in Newark). 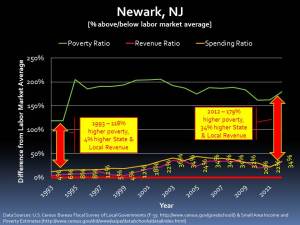 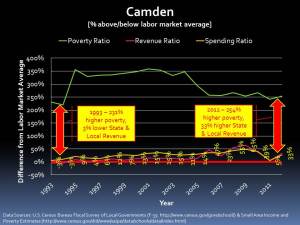 Should we expect some bang for this buck? Yes. And the broader literature on the topic certainly suggests that such bang exists.

But the point of this post is that we have to first look at how hard we really have tried thus far, and to acknowledge those places where we haven’t tried at all.

Yeah we’ve put some though really not all that much effort, given the extreme needs, into places like Newark and Camden.

We’ve never really tried. These districts and the children they serve have never – in the past 20 years been given a fair shot. And even more depressing is that while policymakers and the fabricati (hack pundits who simply make shit up if it serves their purpose) that (dis)inform them have perpetuated these myths and lies, things have only gotten worse.

[3] Bruce D. Baker and Preston C. Green III as well as William Koski and Rob Reich explain that to a large extent, education operates as a positional good, whereby the advantages obtained by some necessarily translate to disadvantages for others. For example, Baker and Green explain that, “In a system where children are guaranteed only minimally adequate K–12 education, but where many receive far superior opportunities, those with only minimally adequate education will have limited opportunities in higher education or the workplace.” Bruce D. Baker and Preston C. Green, “Conceptions of Equity and Adequacy in School Finance.” In Helen F. Ladd and Edward B. Fiske, eds., Handbook of Research in Education Finance and Policy (New York: Routledge, 2008), p. 203–221; Koski and Rob Reich, “When “Adequate” Isn’t: The Retreat From Equity in Educational Law and Policy and Why It Matters,” Emory Law Review 56 (3) (2006): 545–618, available at http://www.law.emory.edu/fileadmin/journals/elj/56/3/Koski___Reich.pdf.