Pro-Annual Testing of Everyone pundits are all in a tizzy about Opt-Out. In their view, parents who opt out are severely compromising accountability for our public education system. They are eroding the public interest in the most selfish possible way. What seems to irk these pundits as much as anything is the possibility that the recent pattern of opting out appears (empirical question for a later day) to be disproportionately occurring in upper middle income to upper income communities – A group, over which pundits have have little control or possible leverage [little opportunity for punitive policy – which drives them crazy].

So the pundits say, the disproportionate opting out of upper income white children from testing will severely compromise the ability of policy makers to accurately measure achievement gaps between those children and poor and minority children more compliantly sit down, shut up and fill in the bubbles (ok… point and click).

If the affluent families opt out, we really won’t know how far behind those who are less affluent really are?

But do we anyway?

This whole line of reasoning is yet another example of the lack of demographic/contextual understanding and related number sense of those making these arguments. The edu-pundit-innumerati strike again!

These same innumerate pundits previously claimed that annual testing of everyone is absolutely necessary for accurately measuring within school and within district achievement gaps among student subgroups, totally failing to understand that few schools and districts – even when everyone is tested – actually have sufficient populations of subgroups for measuring gaps – and further that the approach most often used for measuring gaps is total BS – statistically that is. Actually, measuring within school and within district gaps and using those measures to penalize schools and districts ends up selectively penalizing only those schools for whom the gaps can be measured – integrated schools.

So then, why is this new argument equally statistically and demographically bankrupt? Certainly it would be the case that if those not taking the test were disproportionately of a certain race or of higher income, that average scores would be biased, and likely biased downward for any data aggregation that would/should include these families. So then, of course it’s a problem, right?

What the edu-pundit-innumerati fail to realize is that there already exist larger shares of disproportionately higher income kids in nearly every state who are already opting out of these assessments by opting into schools that generally don’t give them. Are these kids somehow not an issue of public policy concern, merely because they attend private schools (or homeschooling)?

If parents in Scarsdale, NY or Millburn, NJ opting out of state assessments matters toward our understanding of gaps in educational opportunity across children of the state by income and race, then so too do the unmeasured outcomes of children opting out of the public education system as a whole.

Here are the numbers for children between the ages of 8 and 17 (those who might fall in tested grades) for New Jersey and New York. 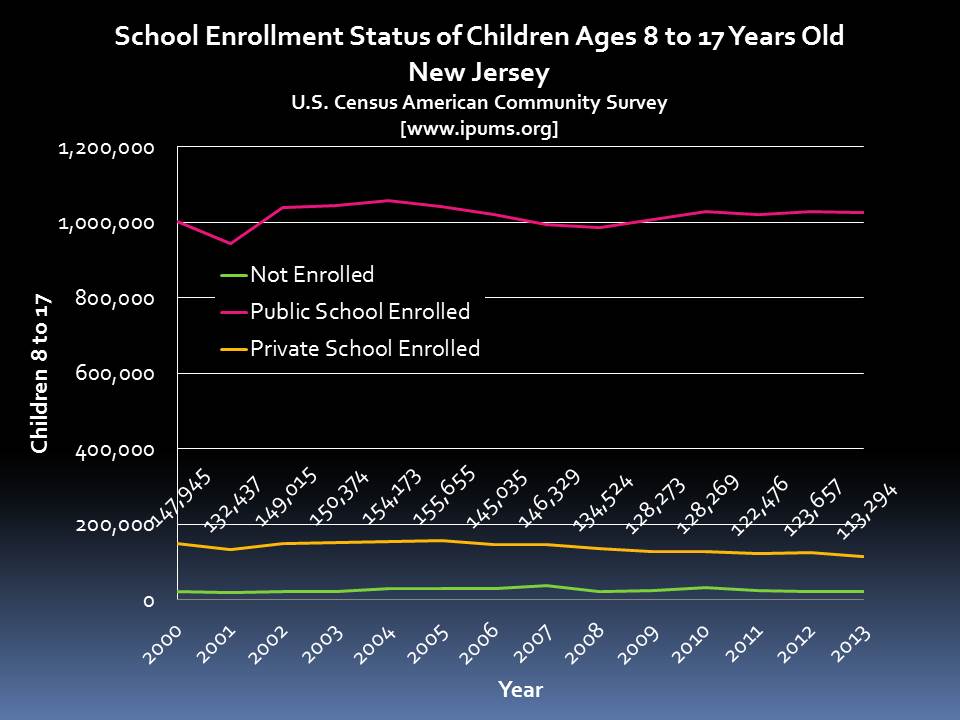 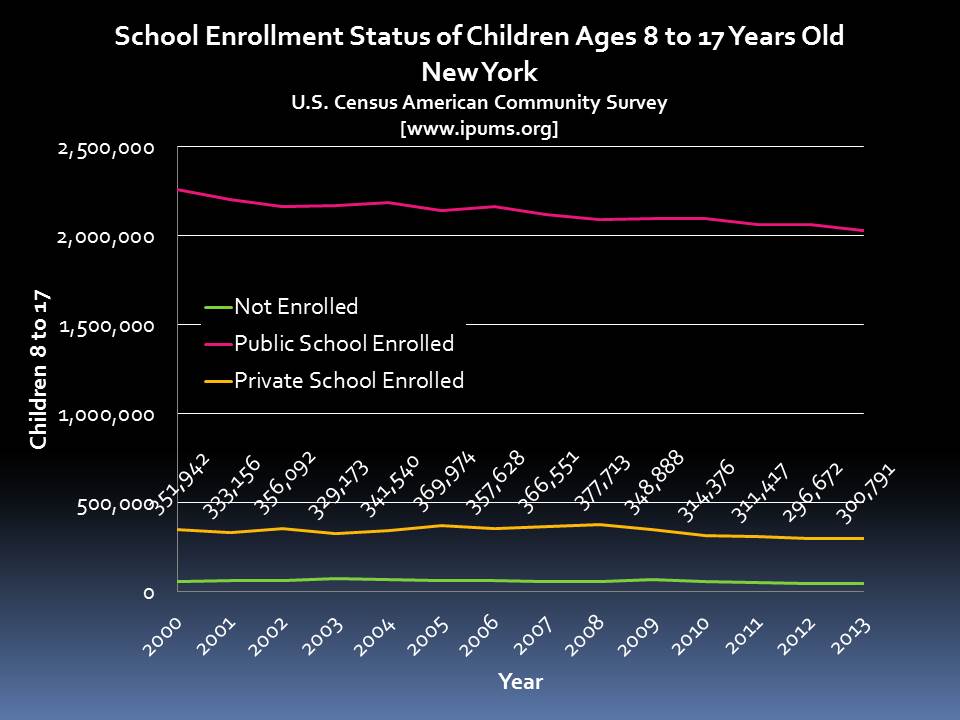 In each state, over 10% of children in this age range do not attend the public schools. 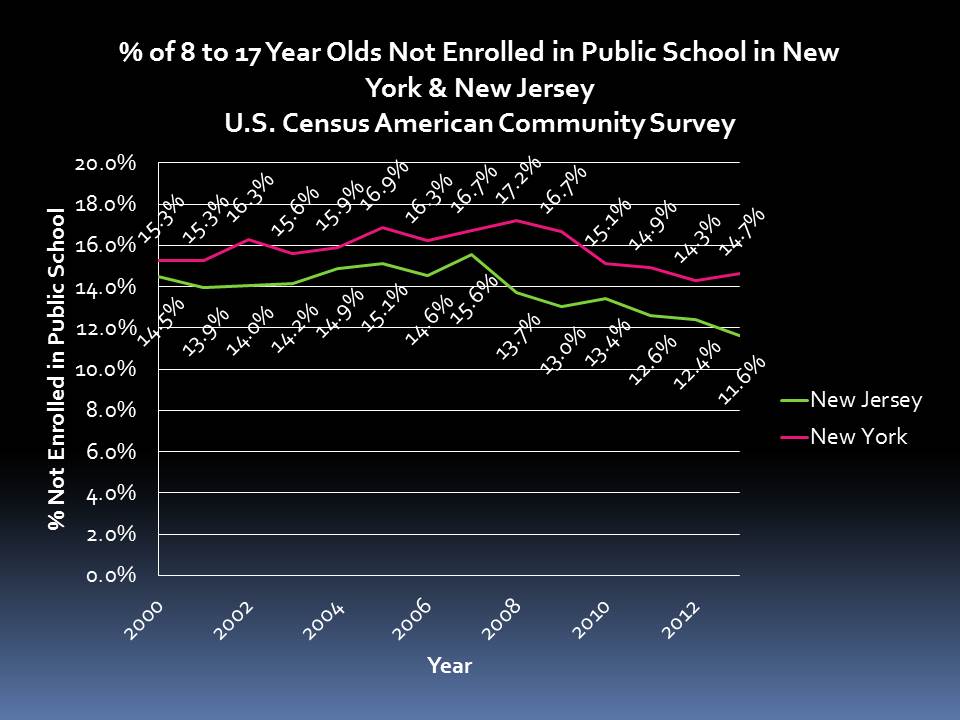 In New Jersey, the average Total Family Income of those in private schools is about $160k, compared to about $110k for those attending public schools. 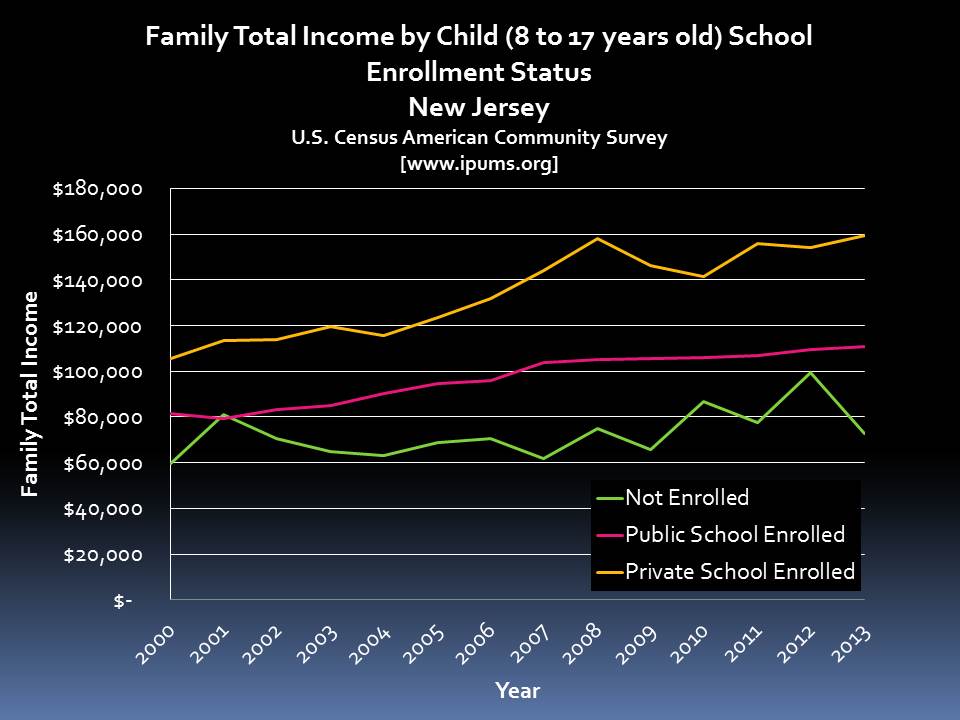 In New York, the average Total Family Income of those in private schools is about $140k, compared to $87k for those attending public schools. 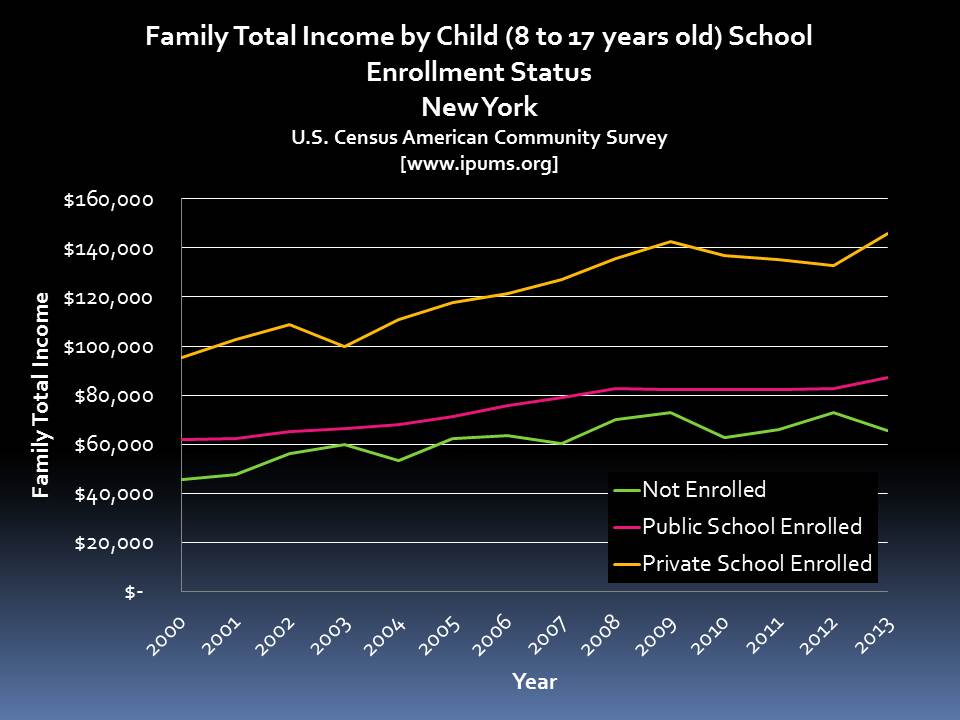 That is, there already exists substantial bias – due to omitted data – in our measurement of gaps in educational outcomes!

Should we try to mitigate any additional bias? Perhaps. But can we pretend that if we do – if we reduce opt outs among affluent public school attendees, we’ve adequately measured outcome equity? Uh… no.

Here’s the breakout of those enrollments by primary affiliation of school, based on the most recent Private School Universe Survey from NCES. 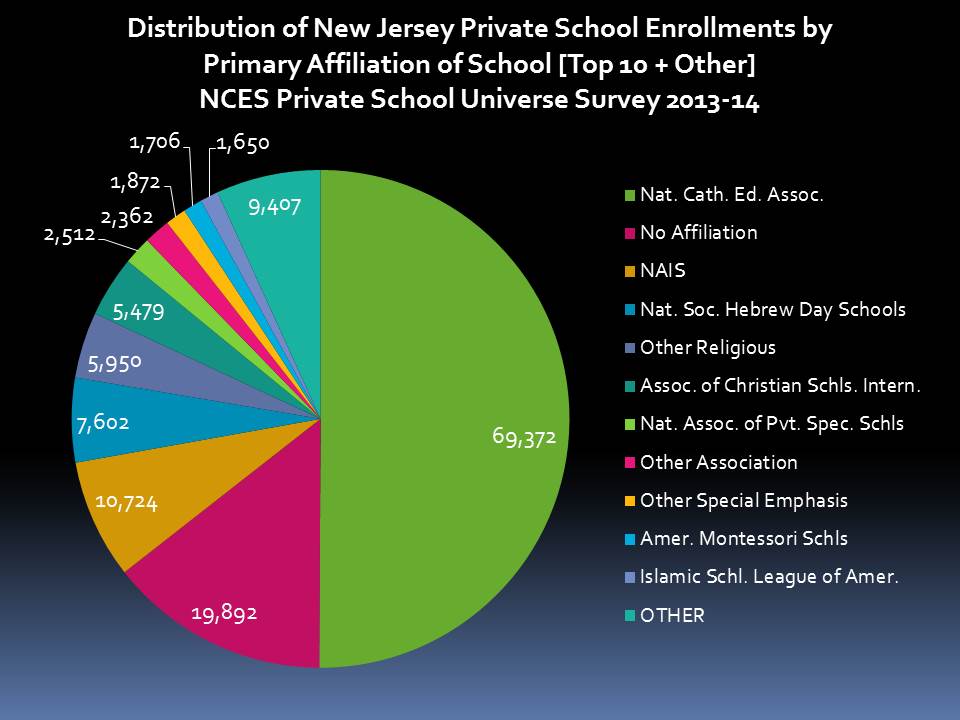 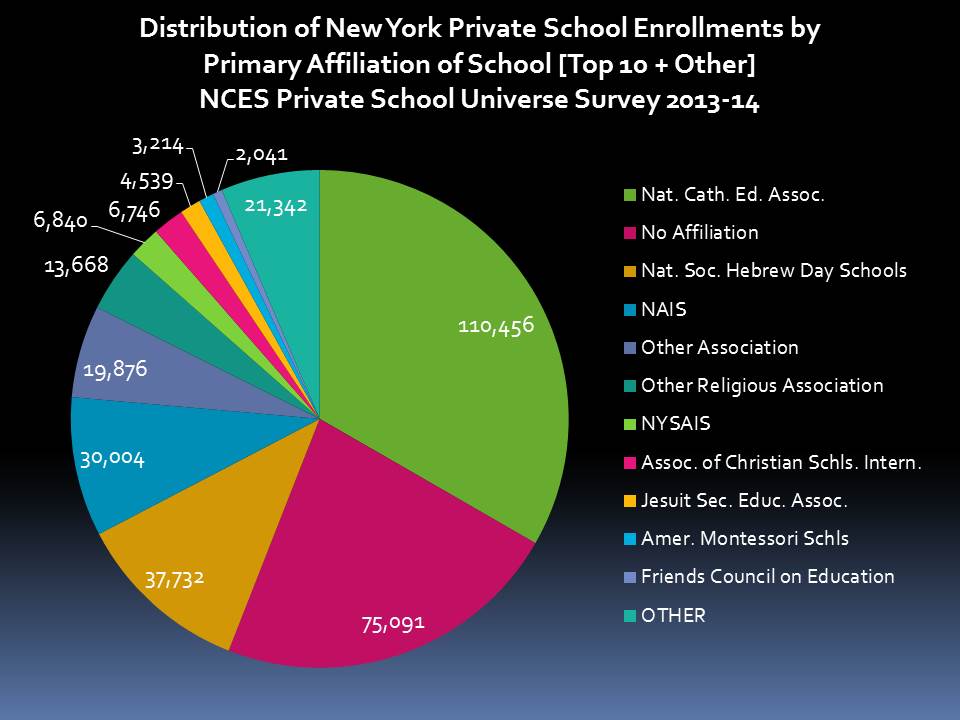 So, is the National Catholic Education Association on board yet [w/CCSS perhaps, but the tests?]? Are they fully adopting/implementing annual testing of everyone?

How about the most (economically) elite schools in this mix, most of whom are members of the National Association of Independent Schools?

The reason why our School Funding Fairness report includes measures of “coverage” and income gaps by coverage is to make clear that even our measures of fiscal disparity across children attending public schools in any state suffer from the bias resulting from our inability to capture the resources available to the relatively large shares of children not in the public system at all, which, for 5 to 17 year olds, exceeds 20% in states like Delaware and Louisiana.

So, to those in a tizzy about opt out.

Annual testing of everyone really isn’t annually testing everyone anyway, and as a result, really isn’t serving the public interest as well as you might think!

Innumerati: Blatantly, belligerently mathematically and statistically inept political hacks who really like to use numbers and statistical arguments to make their case. Almost always out of context and/or simply wrong.

One thought on “What about those high income families that opted out long before the school year started?”