The blogging has been quiet for a while. This is partly because I feel like most issues that arise have already been dealt with somewhere on this blog. Also because I’ve been involved in several, simultaneous, long-term projects. These projects intersect with many topics I’ve addressed previously on this blog. At times, this blog serves as a palette for testing/sharing ideas. So… in this, and a rapid fire sequence of follow up posts, I will share some excerpts of forthcoming, and early stage in progress work.

Increasingly complex governance structures for charter schools provide the financial and legal frameworks shaping charters’ financial management and disclosure. Charter frameworks vary substantively from frameworks governing traditional district schools, generating differences in the flow of money into and out of schools as well as differences in how the two sectors finance the acquisition of such capital assets as land and facilities.

To a considerable extent, these policy arguments are divorced from the legal realities of mixed governance models for the provision of public services, including elementary and secondary education. Through legal challenges brought in both state and federal courts over the past few decades, we have learned that:

Transparency laws adopted by state legislatures requiring open meetings, public access to records and financial disclosure commonly apply to public officials and state operated institutions. However, courts across states have offered mixed opinions as to whether and to what extent those laws apply to charter schools, their authorizers, operators and governing boards. [vi]

In addition, the U.S. Constitution prohibits the government or its agents from violating individuals’ rights to free speech, due process, and freedom from unreasonable searches. Therefore, students and employees in public schools maintain these constitutional rights. In contrast, students in schools run by private entities, or employees engaging in contractual arrangements with private entities, may not enjoy the same protections.[vii] In many of these cases, employment contracts or school discipline policies provide employees or students (and their parents) only the rights guaranteed under private contract law.

Governance and Funding in Traditional District Schools and Charter Schools

Figure 1 compares several delivery structures for the provision of publicly subsidized elementary and secondary education in the U.S. The shapes in the figure with white backfill are public, or government operated institutions. Institutions in dark gray shading are decisively “private” entities, such as private religious schools. Those institutions with characteristics of both public and private organizations are shaded in light grey. For simplicity, Figure 3 excludes other permutations, including relatively new “education savings accounts,” a variation on voucher and tax credit policies.[viii]

As the left side of the diagram indicates, district operated schools are governed by boards of local elected public officials and financed primarily by taxpayers. District schools typically receive a mix of state aid and local (often publicly approved) property taxes, and/or sales and income taxes. The state aid typically comes from income and sales taxes, as determined by state policies. Tax monies collected by state and local government agencies are, of course, public funds.

As indicated on the right side of Figure 1, however, some structures—the Cleveland and Milwaukee voucher programs, for example—allow financial subsidies to be provided directly to private schools. Under these models the schools remain “private” entities, not branches of government itself. But whether they receive public subsidies directly or not, voucher-funded private schools are unlike government operated schools in that they may promote or endorse specific religious values, can restrict student or employee freedom of speech/expression, and need not provide due process in cases of dismissal, unless explicitly required in laws for voucher receiving institutions.

Recently, direct subsidy voucher models have been replaced by tuition tax credit models which insert an additional layer of private governance. Instead of the government providing taxpayer dollars to private institutions, individuals and corporations receive a tax credit for contributing money to a private scholarship granting entity, which in turn provides vouchers. Assuming a 100% tax credit for money donated, the result is mathematically the same as if the government provided the voucher directly. However, the involvement of another private, non-government actor in the flow of funds further limits taxpayer ability to challenge the distribution of tax-related funds.[ix] And, the schools receiving students funded by the scholarships remain clearly private. 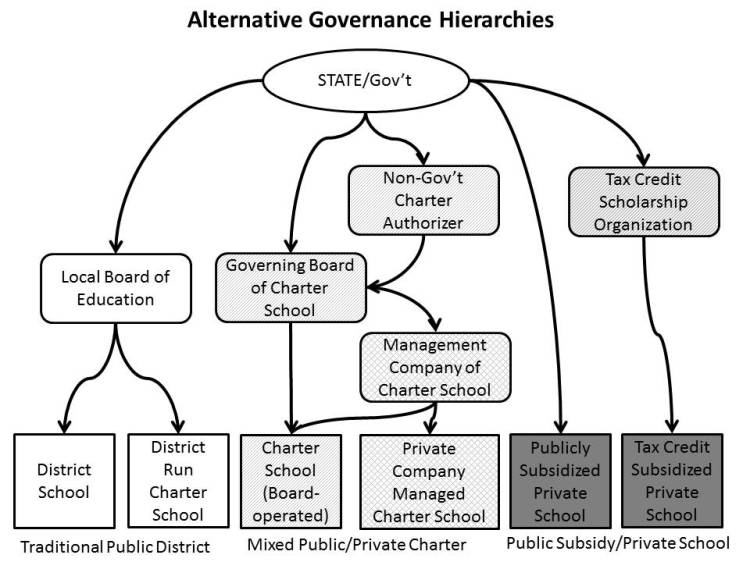 The middle of Figure 1 illustrates other governance options that occur under state charter school statutes. Charter schools are authorized to exist by an entity called an “authorizer”—either government itself or another entity with delegated authority. Charter schools are “authorized” to establish themselves as institutions eligible to receive taxpayer financed subsidies in order to provide elementary and secondary education to eligible children. The state may draw on its tax revenues to pay subsidies directly to “fiscally independent” charter schools. Or, the state may send its subsidies to local public school districts, which then pass on to charters a combination of state tax revenues and locally derived tax revenues. That is, under state charter school laws, districts that are geographic hosts to charter schools may be obligated to transfer to those schools both funds sent to the district by the state and funds raised from local property taxes. One permutation not depicted in Figure 3 allows local boards of education to authorize a charter school to operate independent of district governance (Wisconsin). Another permutation allows state approved authorizers to include such other public entities as universities, mayors, city councils, county boards and so on.

Other variations exist in state approaches to authorizing charter schools. In some states, the state agencies themselves exclusively determine who may operate a charter school, where that school may be located and who is eligible to attend. In other states, local public school districts may authorize establishment of charter schools within their jurisdiction. In both of these cases, the authorizing body remains “public,” and subject to the relevant legal obligations of public officials and government institutions.

Other states, like Ohio, permit private, non-government entities to serve as authorizers. That is, the state delegates responsibility for determining what entities should qualify for taxpayer subsidy. These authorizers are governed by boards of private citizens, not elected officials. As a result, their meetings, various activities, documents and so on may be shielded from public scrutiny, depending on case law and specific statutes in the state. Authorizers typically have the authority and responsibility to allow, renew and revoke charters. Public accountability of this system depends up authorizers and charter operators being independent entities.

Charter school operations and governing bodies also take many forms. In most states, charter school governing boards are appointed boards of private citizens, like those governing any private non-profit (and in some cases for-profit) institution. State laws vary in terms of how much private governing boards must disclose about their activities and documents as compared requirements for public entities. In theory, as would be the case with a non-profit private school, an individual or group of “founders” would seek and appoint a board of directors who would then collectively establish the mission and vision as well as bylaws of the institution. Just as a pending private school might seek accreditations and/or other endorsements (association membership, for example), the charter founders would apply to an authorizer for a charter to enroll students and receive the taxpayer subsidized funds that come with them.

Maintenance of public accountability relies on the presumption that any charter school’s (or any business entity’s) board of directors is sufficiently independent of the contracted private management company that it may sever ties with that contractor and seek alternatives for school management, if necessary.[x]

Local public districts can also contract, and have contracted, private management firms to operate some or all schools within their jurisdictions.[xi] So too could private schools. But when public districts have contracted private management in the past, districts have maintained collective bargaining agreements for those teachers and other employees in schools operated by private contractors.[xii]

Traditional districts also contract with private for-profit busing companies, food service providers, providers of curricular materials, data management products and professional development programs. Employee contracts in these areas are unlikely to be subject to public scrutiny. Similarly, details of such expenditures may be shielded from public view.[xiii] Such is the nature of complex public-private business relationships.

It is not clear if a traditional district, governed by a board of elected or appointed public officials, could use private managers to shield themselves from disclosure requirements or violations of the constitutional rights of students, parents or employees. The multiple layers of private school operations and management, governing boards of private citizens, and in some cases, authorization by private entities, presents far greater opportunity to shield documents and avoid constitutional and statutory protections in the charter sector.

[iii] McShane, M.Q. (2012) Moving from a School System to a System of Schools. Education Next http://educationnext.org/moving-from-a-school-system-to-a-system-of-schools/

[iv] See, for example the blog of Neerav Kingsland, formerly of New Schools for New Orleans, at: http://relinquishment.org/what-is-relinquishment/

[vii] For a thorough discussion of related case law see:

[viii] 5 states have this type (most notably Nevada) and it is different. For a discussion see,

Julie F. Mead, The Right to an Education or the Right to Shop for Schooling: Examining Voucher Programs in Relation to State Constitutional Guarantees, 42 Fordham Urban Law Journal 703 (2015).