Elementary and secondary schooling, regardless of sector – public, publicly authorized and financed charter, or private – remains a human resource intensive industry.  Quality schooling requires sufficient numbers of sufficiently trained teachers, support staff, administrators and others to get the job done.  There must be enough of them and they must be sufficiently compensated to attract quality candidates into the field. 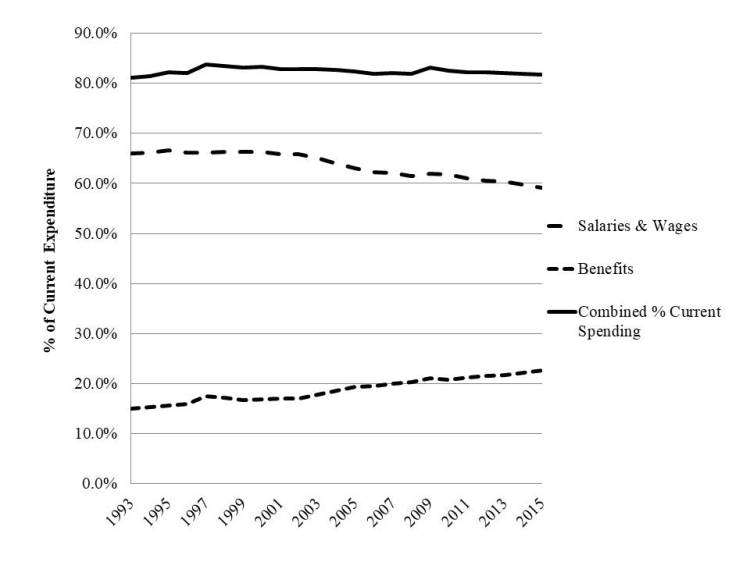 Reformers and edupreneurs[i] have spent decades diddling around the edges of education systems pursuing the ultimate technological innovations. In the broad sense, technological innovation for improving productivity and efficiency refers to any change in the way things are done – the organization and deployment of staff, delivery of programs, use of materials, supplies, etc. where those changes are brought about by introduction of some new technology – as simple as pens and pencils replacing slate tablets. The idea is that the introduction of new technology and resulting change in the way things get done, leads to improved efficiency – lower cost of getting the same outcomes, or same cost of getting even better outcomes!  An extension of this concept, “Disruptive Innovation” refers to major shifts in the way things are done. Critics of public education systems assert that disruptive innovation is needed to completely overhaul our stagnant, costly, inefficient and failing system.

Modern edupreneurs and disrupters seem to have taken a narrow view of technological substitution and innovation, equating technology almost exclusively with laptop and tablet computers – screen time – as potential replacements for teachers – whether in the form of online schooling in its entirety, or on a course by course basis (unbundled schooling).[ii] For example, the often touted Rocketship model (a chain of charter schools), makes extensive use of learning lab time in which groups of 50 to 70 (or more) students work on laptops while supervised by uncertified “instructional lab specialists.”[iii] Fully online charter schools have expanded in many states often operated as for-profit entities.[iv] The overarching theme is that there must be some way to reduce the dependence on human resources to provide equal or better schooling, because human resources are an ongoing, inefficient expense.

In 2011, on the invitation of New York State Commissioner of Education John King (later, replacement of Arne Duncan as U.S. Secretary of Education), Marguerite Roza, at the time a Senior Economic and Data Advisor to the Bill & Melinda Gates Foundation,[v] presented the Productivity Curve illustration (Figure 11) at a research symposium of the New York State Board of Regents.[vi] Roza used her graph to assert that, for example, for $20,000 per pupil, tech-based learning systems could provide nearly 4x the bang for the buck as the status quo, and double the bang for the buck as merely investing in improved teacher effectiveness.

The most significant shortcoming of this graph, however, was that it was entirely speculative[vii] (actually, totally made up! Fictional!) – a) not based on any actual empirical evidence that such affects could be or have anywhere been achieved, b) lacking any definition whatsoever as to what was meant by “tech-based learning systems” or “improve teacher effectiveness”, and c) lacking any information on the expenditures or costs which might be associated with either the status quo or the proposed innovations. That is, without any attention to the cost effectiveness frameworks I laid out in the previous chapter. The graph itself was then taken on the road by Commissioner King and used in his presentations to district superintendents throughout the state![viii] 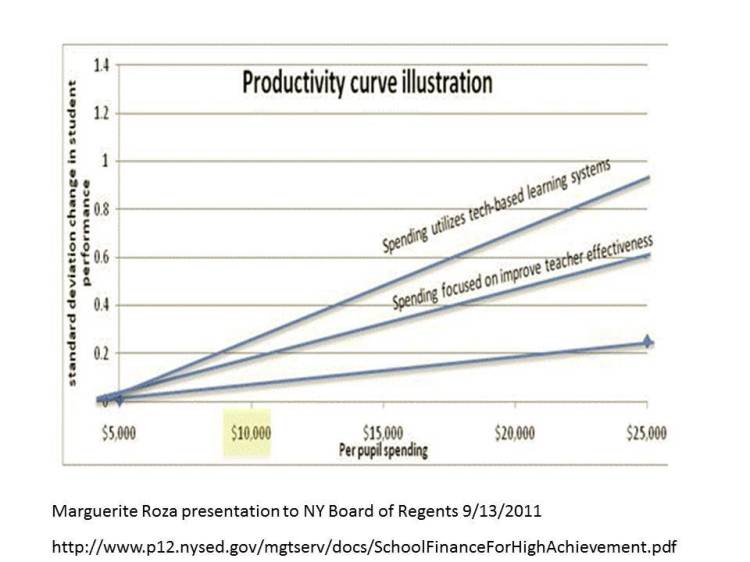 In a comprehensive review of literature on the state of charter schooling in the U.S., including online charter schooling, authors Epple, Romano and Zimmer paint a rather ugly picture of the outcomes achieved by fully online “cyber” charter schools, noting: “online ‘cyber’ schools appear to be a failed innovation, delivering markedly poorer achievement outcomes than TPSs.”[ix] (p. 55) Perhaps we just haven’t figured out yet how to most effectively and efficiently deploy mass substitution of human resources with computing technology. Or, perhaps, such mass substitution simply isn’t productive. Most disturbingly, expansion of these alternatives has not been accompanied by serious efficiency or cost effectiveness analysis. Indeed it’s possible that the outcome reductions measured are consistent with the associated expenditure reductions, thus a break-even on efficiency.

That is, doing less for less.

[vii] Note that the lines in the graph are actually drawn in, and not graphed from data. Also, the lines imply that at $5,000 per pupil expenditure, regardless of approach – status quo, improved teacher effectiveness, or tech-based solutions, nothing can be accomplished, though it is unclear whether the Y-axis represents an absolute standard, or change, or relative to what?